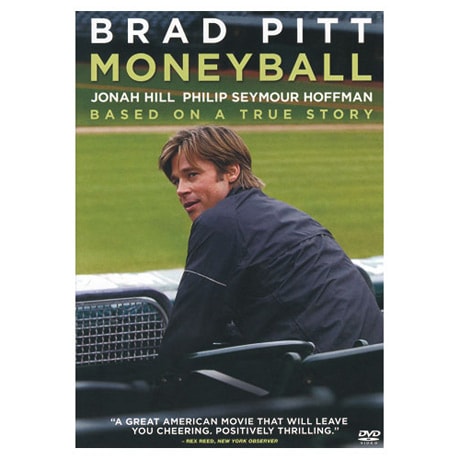 (Nominated for 6 Academy Awards: Best Picture, Actor/Brad Pitt, Supporting Actor/Jonah Hill, Screenplay, Editing, and Sound Mixing) Stinging from the Oakland Athletics' 2001 postseason loss to the well-funded New York Yankees, the team's general manager Billy Beane (Brad Pitt) seeks to assemble a winning team on a limited budget, and finds his answer when he meets young Yale economics graduate Peter Brand (Jonah Hill). Devising a radical new approach to rating draft prospects, Beane and Brand are on the cusp of revolutionizing baseball, but team manager Art Howe (Philip Seymour Hoffman) is determined to buy only the most impressive players available, in this 2011 drama, based on Michael Lewis's nonfiction book of the same title. The DVD also includes a blooper reel, deleted scenes, a segment on Beane, and a featurette on the making of the movie.

"[This] is one of the best and most viscerally exciting films of the year.... Here's a major-studio movie fired up with rebel spirit."—Rolling Stone

"Moneyball renews your belief in the power of movies."—Wall Street Journal