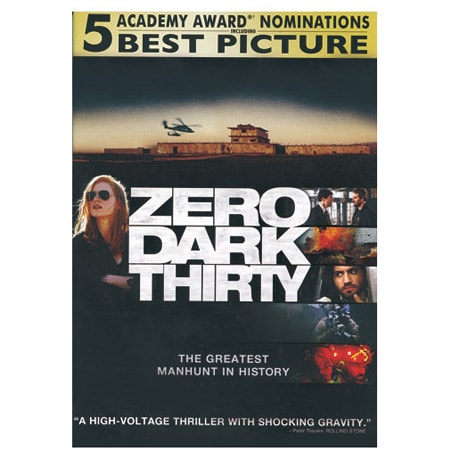 (Academy Award Winner) This Academy Award Best Picture and Best Director nominee from 2012 (it won for Best Achievement in Sound Editing) focuses on the decade-long black ops mission to find Osama bin Laden. Rolling Stone called it "the knockout punch of the movie season," and, truly, your eyes will be riveted to the screen. Jessica Chastain won a Best Actress Golden Globe for her portrayal of Maya, the CIA analyst who uncovered the al-Qaeda leader living in a compound in Abbottabad, Pakistan. Extras include a tour of the rebuilt compound, footage of the cast training with authentic SEAL gear, and a profile of Chastain.

"A monumental achievement that documents a coordinated and complicated response to a monumental tragedy."—Philadelphia Inquirer

"Once in a long while, a fresh-from-the-headlines movie ... fuses journalism, procedural high drama, and the oxygenated atmosphere of a thriller into a new version of history written with lightning.... Bigelow's meticulous and electrifying re-creation of the hunt for Osama bin Laden, is that kind of movie."—Entertainment Weekly