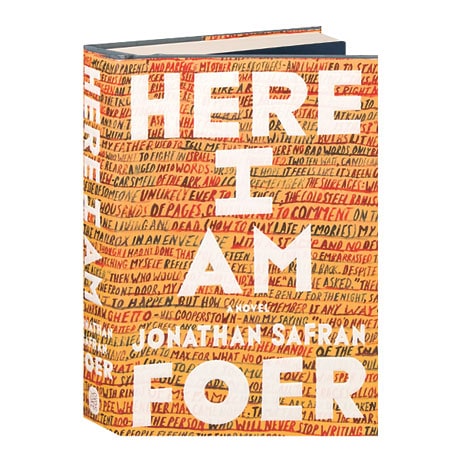 (First Edition, Autographed) (A New York Times Book Review Notable Book of 2016) In Genesis, when God calls out "Abraham!" before ordering him to sacrifice his son Isaac, Abraham responds, "Here I am," affirming that he is there for his God—present in every way. That presence proves elusive to Jacob and Julia Bloch, who have become the perfect modern parents to their three boys, but have forgotten that they were once the center of each other's universe. In the snappy, irreverent dialogue that he perfected in Everything Is Illuminated and Extremely Loud and Incredibly Close, Jonathan Safran Foer takes us into the heart of the Bloch family of Washington, D.C., over four tumultuous weeks, as they are swept up in the aftermath of a catastrophic earthquake in Israel and called upon to remember who they really are—by the world, by their heritage, and by each other. We are thrilled to offer this first new novel by Foer in 11 years as a first edition with a tipped-in autograph page.

"Dazzling.... A profound novel about the claims of history, identity, family and the burdens of a broken world."—Maureen Corrigan, NPR's Fresh Air

"Its observations are crisp; its intimations of doom resonate; its jokes are funny. [This novel] consistently lit up my pleasure centers.... This is also Mr. Foer's best and most caustic novel."—NYTimes

"[This is] an exciting, masterful performance.... With this novel, [Foer] is stepping up to compete for his place in literary history."—Prospect (UK)

"Foer can place his reader's hand on the heart of human experience, the transcendent beauty of human connections. Read, you can feel the life beating."—Philadelphia Inquirer

"Foer's intensely imagined and richly rewarding novel ... is a teeming saga of members of the [Bloch] family.... Throughout, his dark wit drops in zingers of dialogue, leavening his melancholy assessments of the loneliness of human relationships and a world riven by ethnic hatred. He poses several thorny moral questions, among them how to have religious faith in the modern world, and what American Jews' responsibilities are toward Israel. That he can provide such a redemptive denouement, at once poignant, inspirational, and compassionate, is the mark of a thrillingly gifted writer."—Publishers Weekly (starred review)

"Here I Am signals the accomplishment of a writer in full control of his extraordinarily creative imagination, who has become comfortable with pushing the conventions of fiction to reveal how ordinary people respond to their fracturing world.... The irresistible narrative gymnastics are as energetic and dazzling as ever and are in full service of a big, important novel from a confident, mature writer."—Shelf Awareness