The Empire of Necessity: Slavery, Freedom, and Deception in the New World 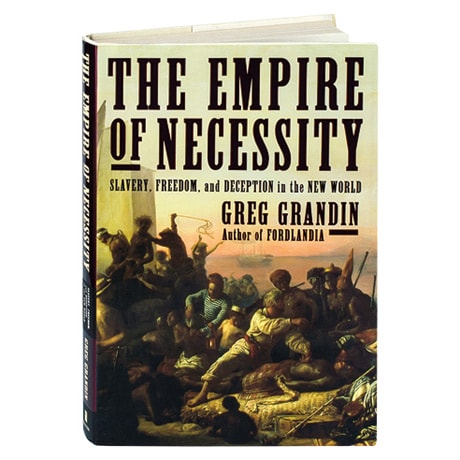 The Empire of Necessity: Slavery, Freedom, and Deception in the New World

In this follow-up to his Pulitzer Prize and National Book Award finalist Fordlandia, historian Greg Grandin revisits the slave rebellion that inspired Herman Melville's Benito Cereno to explore the dichotomies of the slave trade in the Americas. In 1805, off a remote South Pacific island, Captain Amasa Delano climbed aboard a distressed Spanish ship carrying scores of West Africans whom he thought were slaves. They were in fact escapees staging an elaborate ruse, and had seized control of the vessel and slaughtered most of the crew. When Delano, an idealistic, antislavery New Englander, finally realized the deception, he responded with explosive violence. From research on four continents, Grandin arrays the multiple forces that culminated in this extraordinary event to map a transnational history of slavery in the Americas, capturing the clash of peoples, economies, and faiths that was the New World in the early 1800s.

"Scholarship at its best. Greg Grandin's deft penetration into the marrow of the slave industry is compelling, brilliant and necessary."—Toni Morrison

"Engrossing, well researched and beautifully written ... a rigorously sourced work of scholarship with a suspenseful narrative structure that boomerangs back and forth through time. Grandin has delivered a page-turner. You read it as if it were a thriller novel by Scott Turow or Lee Child."—Chicago Tribune

"A wonder of power, precision and sheer reading pleasure.... Grandin takes readers on a tour of the hell of the slave trade, a tour so revelatory and compelling, we readers, unlike Captain Delano, can't fail to see the truth before our eyes."—NPR's Fresh Air