Thomas Cromwell: The Rise and Fall of Henry VIII's Most Notorious Minister 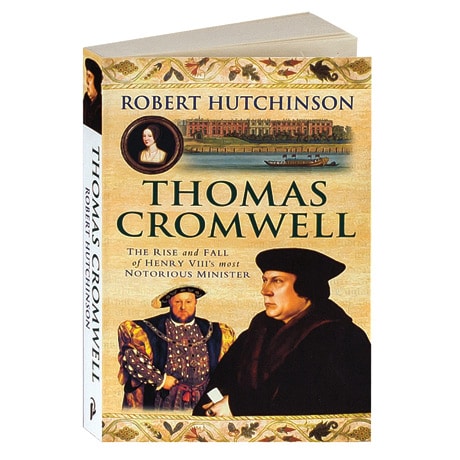 Thomas Cromwell: The Rise and Fall of Henry VIII's Most Notorious Minister

The son of a brewer, Thomas Cromwell rose from obscurity to become Earl of Essex, Vice-Regent and High Chamberlain of England, and Chancellor of the Exchequer, maneuvering his way to the top by intrigue, bribery, and force of personality. In his portrait of Henry VIII's most able minister, Robert Hutchinson describes how Cromwell pursued the king's interests with single-minded energy; tasked with engineering the judicial murder of Anne Boleyn, he tortured her servants and relations and then organized a "show trial" of Stalinist efficiency. He also orchestrated the seizure of Catholic monasteries and used their enormous wealth to cement the loyalty of the English nobility, enrich the crown, and line his own pockets.

"Anyone who sees history as boring should be given Robert Hutchinson's book post haste. Without sacrificing facts and research, he has the ability to construct an absolutely compelling narrative and, though I never thought I'd say this of a book on Thomas Cromwell, one that is impossible to put down. He is one of the few authors who keep you up till 3 a.m."—Bookseller

"Rising to power with Anne Boleyn's decapitation and losing his own head over the Anne of Cleves debacle, Thomas Cromwell (1485–1540) was Henry VIII's loyal hatchet man—dissolving Catholic monasteries, breaking with the pope and finding ever more loopholes to justify Henry's marital and financial whims. Hutchinson effortlessly explains the business side of the Tudor court in which Cromwell's legal mind excelled.... Those more interested in the nuts and bolts of Henry's court rather than the monarch's soap opera antics will find this a welcome respite from fictionalized Tudor drama."—Publishers Weekly