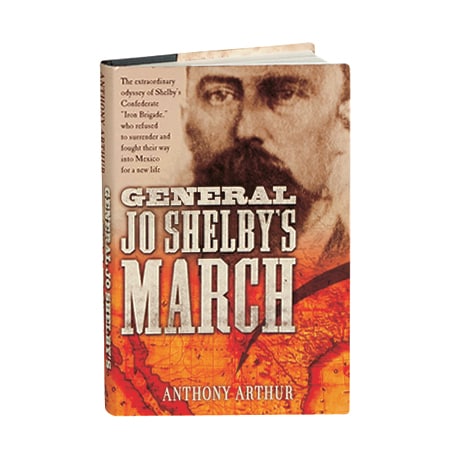 General Jo Shelby had been a daring and ruthless cavalry commander, renowned and notorious for his slashing forays behind Union lines. After Appomattox, Shelby declared that he would never surrender, and headed for Mexico. With 300 men, this "last holdout of the Confederacy," as historian Anthony Arthur dubs him, made the treacherous 1200-mile trip to Mexico City. After near fratricide among his fraying band of brothers, Shelby arrived to present a quixotic proposal to Emperor Maximilian: he and his fellow Americans would take over the Mexican army and, after being reinforced by forty thousand more Confederate soldiers, the government itself.

"As Arthur relates, Mexico was then beset by civil war and banditry, exacerbated by French occupation. Into its lawless desert landscape rode Shelby, accompanied by an admirer invaluable for Arthur's astute reconstruction of events: a journalist named John Edwards. Arriving at Mexico City in numbers depleted by ambushes, the Shelby cohort pledged support to the French, received land grants, and embarked on peaceful agrarian pursuits. His irenic hopes dashed by Mexican raids and French withdrawal in 1867, Shelby resumed life in Missouri and reconciled himself to the Union; he was a U.S. marshal upon his death in 1897. Impressed by Shelby's soldierly qualities and adaptability after the war, Arthur fluidly crafts an exciting narrative for Civil War buffs."—Booklist