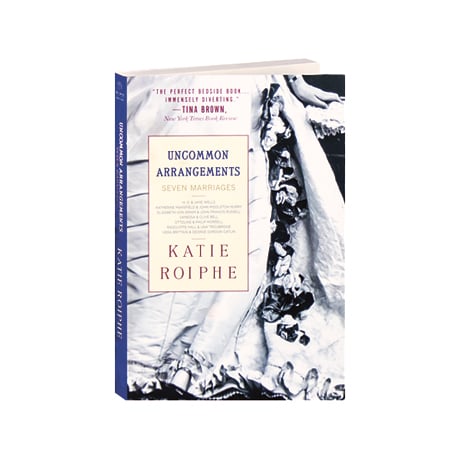 Drawn in part from the private memoirs, personal correspondence, and long-forgotten journals of the British literary community from 1910 to the Second World War, here are seven "marriages ŕ la mode"—each rising to the challenge of intimate relations in more or less creative ways. For example, Jane Wells, the wife of H.G., remained his rock despite his decade-long relationship with Rebecca West (among others), while Vanessa Bell maintained a complicated harmony with the painter Duncan Grant, whom she loved, and her husband, Clive. Every chapter revolves around a crisis that occurred in each of these marriages and how it was resolved—or not.

"In this astute and engrossing examination of seven artsy marriages from 20th-century England, [Katie] Roiphe couples her penchant for social criticism with her training in English literature (she holds a Ph.D. from Princeton). The book's title is apt, for some of the unions Roiphe describes may strike even today's jaded readers as outré. Feminist writer Vera Brittain proposed that she and her husband, George Catlin, be joined in their household by her dear friend, Winifred Holtby. Katherine Mansfield and John Middleton Murry found that their highly romantic conception of love failed to sustain them through illness and other crises. Roiphe also examines the unions of ... Elizabeth von Arnim and John Francis Russell ... Ottoline and Philip Morrell; and Radclyffe Hall and Una Troubridge. Roiphe writes not just as a disinterested historian. She wants to know what she can learn from Brittain and the rest about marriage, and the themes Roiphe focuses on remain relevant to 21st-century marriages: is domesticity compatible with long-term emotional engagement, or are marriages destined to become boring?"—Publishers Weekly (starred review)