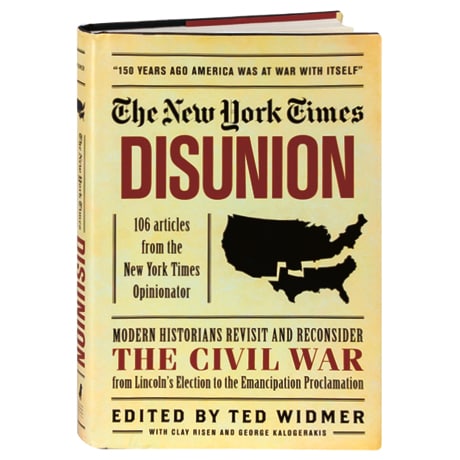 Since its debut in November 2010, Disunion—the New York Times's online journal of modern scholarship on the Civil War—has published hundreds of original articles and won multiple awards, including Best History Website accolades from the New Media Institute and the History News Network. Following the chronology of the secession crisis and the conduct of the war as it unfolded—from the vantage point of 150 years after—contributors like Ken Burns, Harold Holzer, Amanda Foreman, William Freehling, Adam Goodheart, Edward Ayers, and Ted Widmer offer commentary and assessment of the Civil War in more than 100 articles.

"In November 2010, the New York Times opened a website, Disunion, in which Civil War scholars, journalists, and amateur historians have continued to contribute hundreds of essays, biographical sketches, and general commentary about our greatest national trial. Widmer, a historian at Brown University, has selected 106 of these articles, which proceed chronologically from the election of Lincoln to the Emancipation Proclamation. In the first grouping of essays, various aspects of the secession crisis are examined, including a searing portrait of President Buchanan and an often neglected view of anti-secession Southerners. In another grouping, a particularly intriguing essay explores Lincoln's 'audacious plan' to use government bonds to eliminate slavery in the border states. As a whole, the essays are well written, wide ranging and very informative, even for many Civil War specialists. This work will be an ideal addition to Civil War collections for both public and academic libraries."—Booklist