Don't Know Much About the Bible: Everything You Need to Know About the Good Book but Never Learned 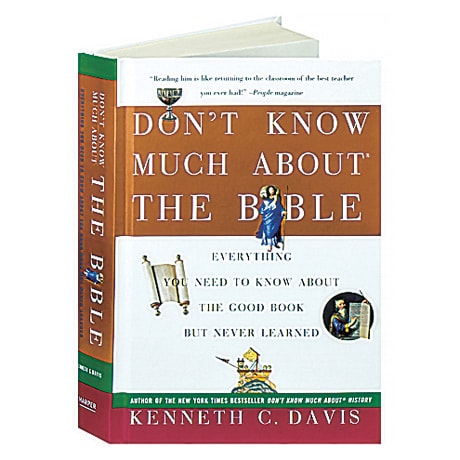 Don't Know Much About the Bible: Everything You Need to Know About the Good Book but Never Learned

Who wrote the Bible? Did Jesus say everything we were taught he did? Did he say more? Here the author of Don't Know Much About History again applies his engaging question-and-answer format to offer a closer look at the book that most Americans own but few have read closely. Through new research and improved translations, Kenneth Davis explains that there are two different Creation stories told in Genesis, yet there's no apple in the Garden of Eden. Joseph's "coat of many colors" was rather a long-sleeved robe. Moses never parted the Red Sea, and David probably didn't kill Goliath. The Sixth Commandment does not condemn all killing. And Jesus wasn't born on Christmas—and probably wasn't an only child.

"Davis continues his popular Don't Know Much About series with a breezy and informative exploration of the Bible.... In order to debunk some common myths and misconceptions, and to clarify a host of confusing mistranslations, Davis analyzes the Bible book by book, asking and answering a succession of perplexing questions specifically designed to shed new light on a time-honored religious classic that has been continually quoted, manipulated, and taken for granted for generations. In addition, he also traces the actual evolution of the Good Book itself, placing many biblical stories more firmly in historical context. Brimming with fascinating facts and fresh interpretations, this wry and witty consideration of the Bible may offend some conservatives, but it will appeal to a wide range of readers eager to expand their scriptural knowledge."—Booklist