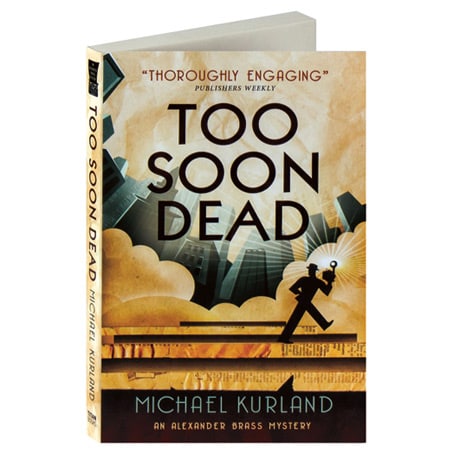 The creator of the Edgar-nominated Professor Moriarty mysteries, Michael Kurland here gives us the first in another witty series, set in 1930s New York City, where newspaper columnist extraordinaire Alexander Brass needs a good story. The saga begins when a furtive tipster promises an explosive story and gives an envelope to Morgan DeWitt—assistant to New York World celebrity newsman Alexander Brass—filled with photographs of a most compromising nature. When another World reporter on the story turns up murdered, Brass and his team resolve to find the killer, running a gauntlet of blackmailing Nazis, accommodating nymphomaniacs, and U.S. senators along the way.

"This strong series launch from Kurland, set in New York City in 1935, introduces a winning pair of sleuths: gossip columnist Alexander Brass and his sidekick, aspiring novelist Morgan DeWitt. A fat man who won't identify himself appears at Brass's Manhattan office and leaves an envelope to be opened by Brass only. When Brass opens it, he finds a series of photographs of prominent people in compromising positions, including a U.S. senator, a state judge, a philanthropist, and a department store magnate. When Brass dispatches reporter Billy Fox to tail the anonymous deliveryman, Billy winds up with his throat cut. Holding himself responsible, Brass sets about to solve the killing, aided by Billy's widow and DeWitt. While the very mobile and social Brass is not an obvious stand-in for Rex Stout's Nero Wolfe, his way of speaking, his selectively straightforward dealings with the police, and his rapport with DeWitt bear some resemblances to Stout's reclusive genius and bode well for future installments."—Publishers Weekly