The Girls in the High-Heeled Shoes: An Alexander Brass Mystery 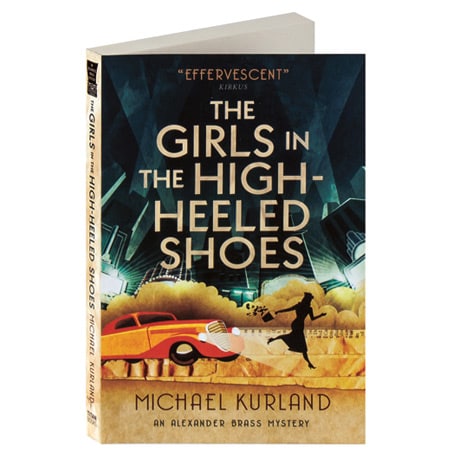 The Girls in the High-Heeled Shoes: An Alexander Brass Mystery

A missing con artist, a stolen till, a murdered chorus girl—sounds like another case for New York World columnist Alexander Brass, in his second big scoop in this 1930s series from the creator of the Professor Moriarty mysteries (following Too Soon Dead). The sleuthing newspaperman wonders why Two-Headed Mary, the well-dressed panhandler who "collects for charity," is missing. So is Billie Trask, who has disappeared from the cashier's office of the hit show Lucky Lady with the weekend take. Could either of them have followed a third Broadway babe, chorus girl Lydia Laurent? When her dead body turns up in Central Park, it falls to Brass and his redoubtable assistant Morgan DeWitt to dig up the truth.

"The New York theater world of the 1930s provides the backdrop for [Michael] Kurland's entertaining sequel to Too Soon Dead, which introduced Alexander Brass, a popular columnist for the New York World newspaper who will remind Rex Stout fans of Nero Wolfe. Two-Headed Mary, a con artist who solicits contributions outside Broadway shows for a nonexistent charity, has vanished. Sandra Lelane, a Broadway actress who says she's Mary's daughter, implores Alex and his Archie Goodwin—like sidekick, aspiring novelist Morgan DeWitt, to search for Mary.... Fears for Mary's safety heighten after a visit to her Brooklyn apartment reveals that someone has impersonated Sandra and looted the place. The lively banter between Alex and Morgan serves to propel the plot as it evokes fond memories of Stout's characters."—Publishers Weekly