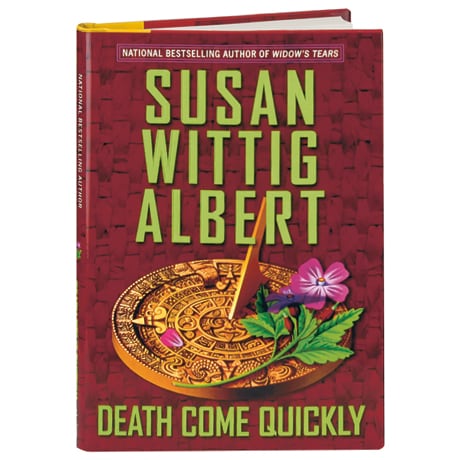 Also the creator of the Darling Dahlias and Beatrix Potter series, and (as Robin Page) the co-creator of the Victorian-Edwardian mysteries, Susan Wittig Albert shows no sign of slowing down in this 24th China Bayles mystery (following Widow's Tears). When China and Ruby's friend Karen Prior is mugged in a mall parking lot and dies a few days later, China begins to suspect that Karen's death was not a random assault, as Karen had been supervising a student documentary about the murder of Christine Morris 15 years earlier. Delving into the cold case, China learns that the first murder may be related to a collection of Mexican art, and calls on San Antonio lawyer Justine Wyzinski—a.k.a. the Whiz—to help track down the killer.

"China Bayles returns to remind readers of the skills that enable Albert to keep four series going with a dynamic cast of characters and an interesting blend of cold cases and modern murder to solve. China's friend Karen is beaten to death in a mall parking lot but not robbed. She had been advising two graduate students working on a film about the 15-year-old murder case of an art collector. Former lawyer turned herbalist China carefully researches the old case, even as one of the graduate students is attacked. Pecan Springs, Texas, police chief Sheila is waylaid with health problems, while China learns more about the cold-case victim's Mexican art obsession and who might want her case to stay unsolved. The herbal and art details provide interesting background, while the plot moves and surprises. The minor characters, such as China's friend Ruby and Sheila, provide as much insight as the heroine in this series."—Booklist