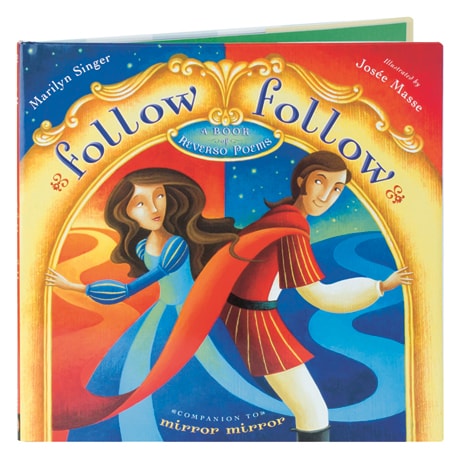 In Mirror Mirror, children's book author and poet Marilyn Singer gave readers 7 to' a brilliant book of fairy tale–themed "reversos," or poems that said one thing when read normally but then revealed a different meaning when read in reverse. This second collection of lyric tales is in every way a "follow-up" to the first, with witty double takes on such well-loved fairy tales as "Thumbelina" and "The Little Mermaid." How do you think the tale told by the third little pig might differ in the wolf's telling? Or how about Aladdin and the jinni? As before, Josée Masse illuminates each story with her vividly colored and textured (and mirrored) paintings.

"This companion to Mirror Mirror offers another fairytale-themed collection of free verse poems, each paired with its 'reverso,' or the poem in reverse. For example, 'The Little Mermaid's Choice' begins 'For love, / give up your voice. / Don't / think twice,' and the accompanying reverso poem concludes with 'Think twice! / Don't / give up your voice / for love.' The punctuation often changes, as does the formatting, thereby offering up intriguing and inventive takes on each tale. Other reversos give varying perspectives, as in the case of 'Ready, Steady, Go!,' which presents both the tortoise's and the hare's points of view. Beautifully rendered, richly hued illustrations artfully transition from depicting the first poem's scenario to the second's, and interweave fantastic and realistic details."—Booklist