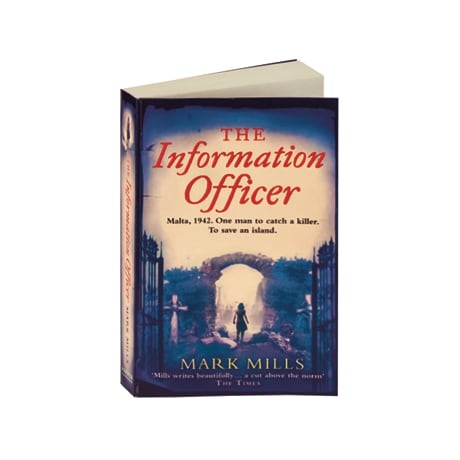 For the people of Malta, suffering daily bombing raids in 1942, the British are the last line of defense against the Nazis, in this gripping spy thriller from the author of The Savage Garden and the John Creasey Memorial Dagger winner Amagansett. Information officer Max Chadwick makes sure that only morale-boosting news reaches the islanders, until he learns that local women are being murdered, possibly by another British officer. Knowing that Maltese loyalty could instantly be shattered should word get out, Max embarks on a private investigation, hidden from his superiors, his friends, and even the woman he loves.

"The sense of immediacy Mark Mills brings to The Information Officer is so intense that this breathtaking novel reads more like a memoir than a wartime thriller."—NYTBR

"Mark Mills's third novel—as magnificent as it is sober and chilling—evokes the horror of Malta under siege. The war, however, provides more than a backdrop to this superb spy thriller, gripping mystery, and work of historical fiction; it directs Max's choices as he sets out to investigate the murders. Critics lauded the plot's complexity, smooth pacing, and attention to detail. However, it was the sadistic killer—and his incisive, depraved musings—that really caught most reviewers' attention and that elevates this novel above its genre. In sum: a standout work deserving of a wide readership."—Bookmarks Magazine