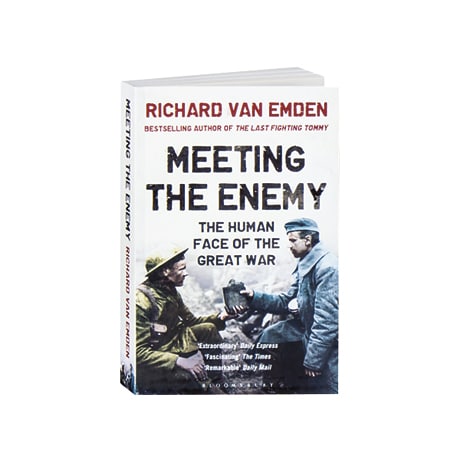 A British soldier walked over to the German front line to deliver newspapers; British women married to Germans became "enemy aliens" in their own country; a high-ranking British POW discussed his own troops' heroism with the Kaiser on the battlefield: these are just a few of the remarkable stories here of contact between British and German troops and civilians on the Western Front and the Home Front during World War I. The author of Boy Soldiers of the Great War and The Last Fighting Tommy explores both the brutality and the humanity of those who found themselves caught up in a conflict between nations with longstanding ties of kinship and friendship.

"Richard van Emden is a World War I specialist who has found a niche, little explored, charting the personal contacts between Britons and Germans and their feelings about each other as the war progressed. Makes you think rather differently about the so-called 'Great War for Civilisation'."—Daily Mail (London)

"An interesting chapter on what happened to those in mixed Anglo-German marriages.... Van Emden wants to remind us that not all was hellish: there was also humor, mutual baiting and occasional easy-going relations. As well as direct contact during the Christmas truces, this book explores indirect contacts, using many unpublished letter and diaries."—Spectator (London)