War! What Is It Good For? 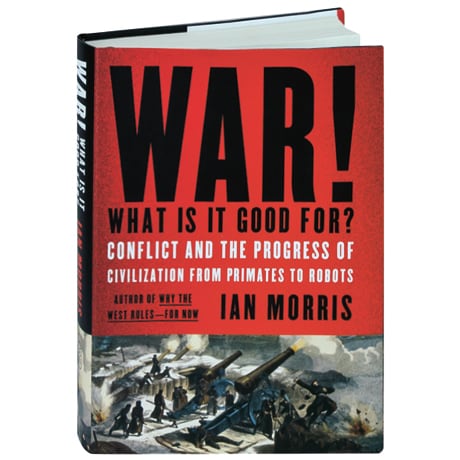 War! What Is It Good For?

Stone Age people lived in small, feuding societies and stood a 1-in-10 or even a 1-in-5 chance of dying violently. In the 20th century, by contrast—despite two world wars, Hiroshima, and the Holocaust—fewer than one person in a hundred died violently. As surprising as it sounds, studies of archaeology, history, and biology prove that war has made humanity safer, and richer. Ian Morris tells the gruesome yet gripping story of 15,000 years of war, going beyond the battles and brutality to reveal how war has created larger, more complex societies, ruled by governments that have stamped out internal violence, allowing their citizens to increase their wealth. Research suggests that the next half-century is going to be the most dangerous of all time, and if we can survive it, the age-old dream of ending war may yet come to pass; only if we understand what war has been good for, Morris argues, can we know where it will take us next.

"Morris ... is a much wittier and more self-deprecating writer than most of his competitors, has a sharper eye for facts and anecdotes, and steers well clear of preening bombast.... Clear, acute and counterintuitive, his book is a pleasure to read."—Sunday Times (London)

"This erudite yet compulsively readable history of war (and actually much more) by archaeologist-historian Morris takes the provocative position that, over time, the value of war, despite its horrors, has been to make humanity both safer and richer. He covers a vast span, from primitive (Morris enlists anthropological studies of chimpanzees and early 'protohumans' to explain aggression) and ancient civilizations to the 'American Empire.' War's impact in terms of lives lost (as a percentage of national population) has lessened, Morris demonstrates, and its long-term effects have been, as he puts it, 'productive.' The thesis is elegantly advanced (there is something to marvel over or even chuckle about on almost every page). Morris is as comfortable referencing Edwin Starr, who sang the song from which the title derives, as he is Thomas Hobbes. Only large centralized states—Hobbes's Leviathans, forged by war—can secure stability. Simply put, 'War made the state, and the state made peace.' Throughout this rare mixture of scholarship, stunning insight, and wit, Morris cites the widely divergent opinions of past philosophers and scholars, and, though he makes his case convincingly, future (and, oh yes, the future is projected) students, readers, and critics of this book are likely to continue the fascinating argument Morris raises here."—Booklist (starred review)