The Emperor's Shadow: Bonaparte, Betsy and the Balcombes 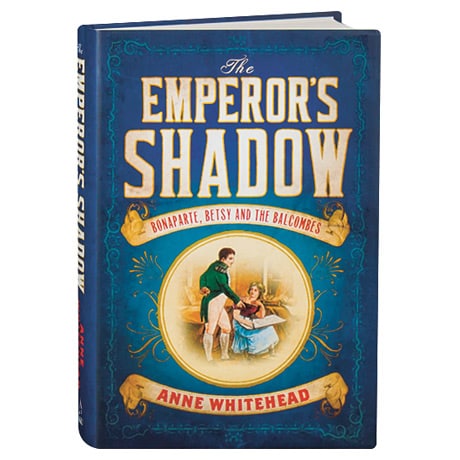 The Emperor's Shadow: Bonaparte, Betsy and the Balcombes

After his defeat at Waterloo in 1815, Napoleon was exiled to St. Helena, where he spent the last six years of his life. Though reduced from the most powerful figure in Europe to a prisoner on a rock in the South Atlantic, Napoleon was charmed by Betsy Balcombe, the pretty teenage daughter of a local merchant—and bereft when the Balcombes had to leave the island in 1818. Published in Australia as Betsy and the Emperor, this history from Anne Whitehead brings to life Napoleon's last years on St. Helena, revealing the central role of the Balcombe family and laying to rest two centuries of speculation about Betsy's relationship with Napoleon. Tracing this remarkable woman's life across Britain, St. Helena, France, and Australia, Whitehead chronicles how Betsy's extraordinary connections to London royalty and the Bonaparte family led a life worthy of a Regency romance, and depicts Napoleon at his most vulnerable, human, and reflective.

"A lively, poignant tale of Napoleon's last years on St Helena and the precocious teenager whose impudent charm briefly enlivened his exile. Her indefatigable pursuit of a tantalizing archival trail takes her readers from St. Helena to England, Scotland, France and New South Wales, uncovering a life curiously shadowed by its early brush with fame."—Penny Russell