The Civil War Generals: Comrades, Peers, Rivals: In Their Own Words 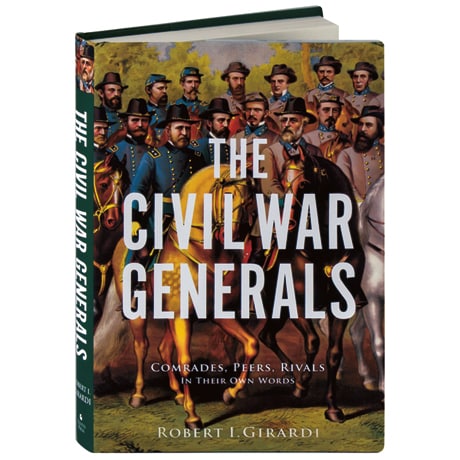 The Civil War Generals: Comrades, Peers, Rivals: In Their Own Words

Offering an unvarnished and fascinating perspective into what military generals wrote and said about each other during the Civil War era, Nevins-Freeman Award–winning historian Robert Girardi profiles more than 400 Union and Confederate generals through the words of those who knew them on the field: "He was an excellent officer; cool, brave, and intelligent; he always did his duty admirably, and was an honest man" (George B. McClellan on George G. Meade); "It is to be regretted that any of his biographers should claim for him skill and grace as a horseman, when they have with truth so much of real greatness to tell of him" (Dabney H. Maury on Stonewall Jackson); "He looked like a highly independent mounted newsboy" (Theodore Lyman on Francis C. Barlow).

"Girardi's book is an excellent contribution to Civil War literature. The work lends itself to either being read straight through or reading quotes at random. The book will also serve as an excellent reference resource. Civil War buffs in particular will greatly enjoy this book."—ArmchairGeneral.com

"Girardi provides an insightful look at 400 American Civil War generals as viewed by their contemporaries and prominent historical figures. While some of those profiled are well known, others are not, and the length of the entries reflects this. The text is divided into two sections, the Union and the Confederacy, and the generals are listed in alphabetical order.... Included are 100 photographs of the generals that, along with the quotes, help to paint a more detailed picture of who these men were. Three excellent appendixes feature a list of the battles and generals involved, a general battle map and four battle-specific maps, and a 'Contributors' listing indicating the source of the quotes.... A useful and easy-to-read resource for history buffs and general readers."—Library Journal