Light Years: The Extraordinary Story of Mankind's Fascination with Light 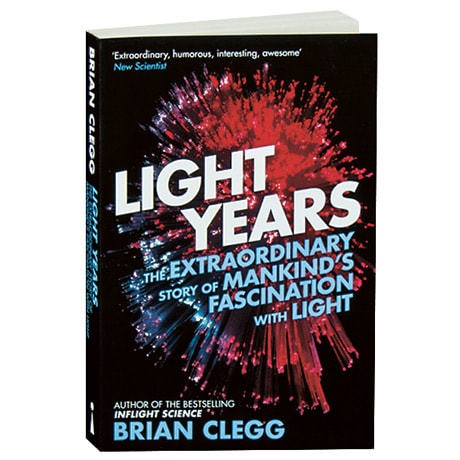 Light Years: The Extraordinary Story of Mankind's Fascination with Light

From the first scientific grapplings with light by Chinese sage Mo-Tzu, Greek philosopher Empedocles, and Arab genius Alhazen, through the works of artists like Brunelleschi, Da Vinci, and Dürer, British science writer, speaker, and columnist Brian Clegg tells the story of mankind's eternal fascination with light, culminating in the revelations of modern physics. Clegg also considers the application of light in devices like the camera, the laser, CD and DVD recordings, and fiber optics, as well as mind-bending possibilities for the future of light technology, utilizing its quantum behavior.

"This immensely likeable work of pop science traces 'man's enduring fascination with light,' from Aristotle's plans for a death ray (burning enemy ships with a giant array of mirrors) through to a recent experiment that seems to have sent Mozart's 40th Symphony faster than light, and thus back through time. Clegg is very good at explaining the bizarre properties of light."—Guardian (London)

"Light's properties often seem mysterious to the point of being unfathomable. Yet in this extraordinary book Brian Clegg manages to explain them through the lives of those so fixated with light that they have shaped our perception of it.... Clegg's accessible writing style manages to encapsulate the lives of light's disciples with humorous and interesting anecdotes.... Clegg also provides real scientific insight into how light behaves. He explains complex theories through lucid metaphors, without resorting to the elaborate diagrams so beloved of some popular science writers.... Clegg indulges in future gazing, too, the results of which are quite awesome."—New Scientist