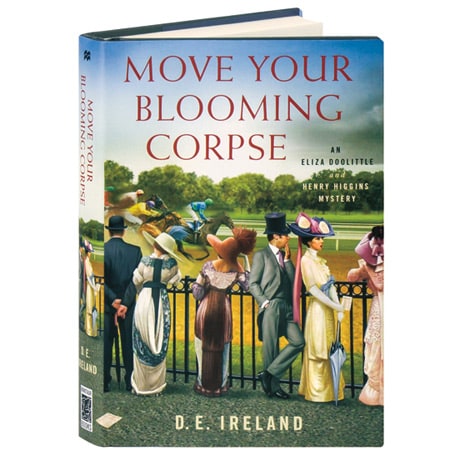 We're off to the races again in this delightful second outing for Eliza Doolittle and Henry Higgins (following Wouldn't It Be Deadly), and this time it's a real equestrian event. The beloved characters from My Fair Lady are attending the Royal Ascot, the pinnacle of the racing season. Eliza's father Alfred, now semi-respectable, has invested some of his newfound wealth in a champion racehorse, and Eliza and Higgins are there to cheer Donegal Dancer on to victory. Their outing takes a turn however, after someone is trampled during the Gold Cup race and another body is found in the stables. Amid jealous spouses, passionate suffragettes, and the colorful co-owners of Donegal Dancer, our heroes must outrace a murderer, before there's another blooming corpse at the finish line.

"The snappy pace and fun banter keep the story moving, while details about the suffragette movement, horse racing, fashion, and foods of the Edwardian era add plenty of appealing color, as does the quirky supporting cast."—Booklist