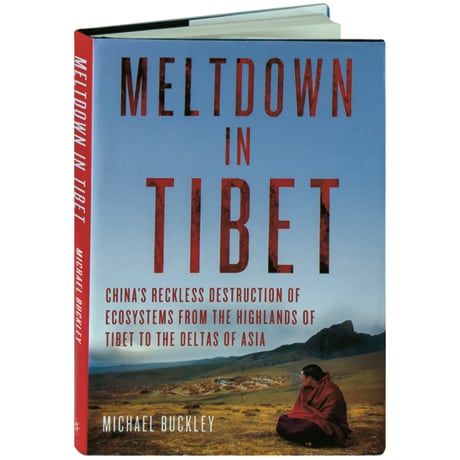 The Himalayan snowcaps are rapidly melting down, due to climate change and a rain of black coal soot from China and India. Tibetan rivers are dammed by Chinese engineering consortiums to feed the mainland's thirst for power, and the land itself is being stripped for minerals to feed China's rapacious industrial complex; after decades of genocidal policies under the Chinese, Tibetans now face ecocide, as their land is being indiscriminately ravaged. Nor are they the only victims, as nations downstream from Tibet have their vital supplies of water and silt choked off. Canadian journalist Michael Buckley—author of Lonely Planet's first guidebook to Tibet, in 1986—sounds the alarm for a coming disaster that would affect millions, with global repercussions.

"Buckley renders an important service in this outspoken book.... [Documenting] the calamitous consequences of China's unsparing usurpation of Tibet's natural resources ... at a time when many Western authors are acquiescing in censorship for the tawdry privilege of being published in China, Meltdown in Tibet is made indispensable by the mere fact of its existence."—Washington Post

"Meltdown in Tibet is full of evidence of ethnocide and ecocide, brutal repression, human rights violations, wide corruption and profiteering at the highest levels.... It is the huge dams that most worry Buckley. Widely travelled, with deep knowledge of terrain and peoples, he ... neatly encapsulates the mainstream Chinese view by quoting a hydrologist who says such rivers are 'an awful waste of water leaving China.'... Highly readable."—New Scientist

"An instructive book on the roof of the world. Its documentation is impeccable, and it deals with Tibet seen from a rarely tackled angle: its role in world climate."—Forbes