The Strange Case of the Rickety Cossack: And Other Cautionary Tales from Human Evolution 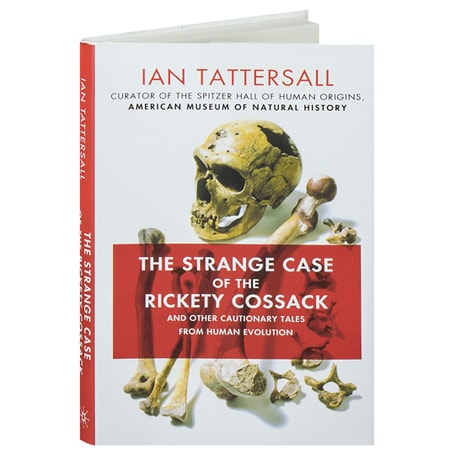 The Strange Case of the Rickety Cossack: And Other Cautionary Tales from Human Evolution

Paleoanthropologist Ian Tattersall argues that a long tradition of "human exceptionalism" in that field has distorted the picture of human evolution. Drawing partly on his own evolution from awestruck young scientist to crotchety elder statesman, Tattersall offers an idiosyncratic look at his competitive scientific world, beginning with Charles Darwin, through the Leakey dynasty in Africa, and concluding with astonishing recent findings in the Caucasus. The book's title refers to the 1856 discovery of a skullcap in Germany's Neander Valley. The possessor had a brain as large as that of a modern human, but a heavy low braincase and a prominent brow ridge. Scientists tried hard to explain away the inconvenient possibility that this was not actually our direct relative; one extreme interpretation suggested that the preserved leg bones were curved by both rickets and by a life on horseback. It was the pain of the unfortunate individual's affliction that had caused him to chronically furrow his brow in agony, leading to the excessive development of bone above the eye sockets. The subsequent history of human evolutionary studies is full of similarly fanciful interpretations, notes Tattersall, who chronicles such incidents with tact and humor, concluding that we are not the perfected products of natural processes, but instead the result of substantial doses of random happenstance.

"Highlights the controversial ideas and colorful personalities that have shaped paleoanthropology and given rise to our current understanding of how we became human."—Scientific American