The Grasshopper & the Ants 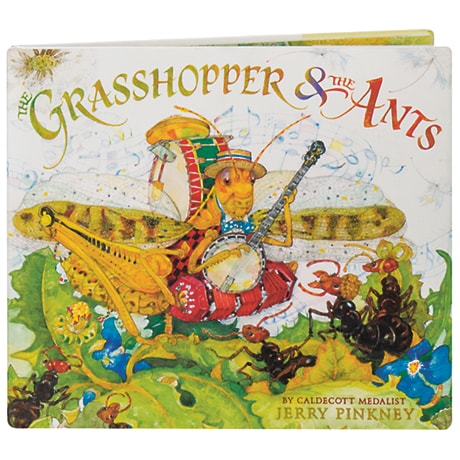 The Grasshopper & the Ants

Joining The Tortoise & the Hare and the Caldecott Medal book The Lion & the Mouse, this is another nearly wordless interpretation of a favorite Aesop fable from five-time Coretta Scott King Award and Caldecott honoree Jerry Pinkney, for readers up to 6. His gorgeously detailed watercolors tell the story of Grasshopper, a playful musician full of joie-de-vivre, and the industrious ants who work hard all year gathering food for the winter. But Pinkney's Grasshopper isn't merely a fool; his warm personality and abundant sense of joy earn him many friends, so that when he's left shivering in the snow with nothing to eat, Queen Ant invites him in for a cup of tea, and a musical celebration ensues underground.

"The incomparable Pinkney ... again turns an Aesop fable into a tale of great beauty and moral complexity.... [With] stunningly detailed watercolors, it's a celebration of both productivity and art, and a call for generosity toward the down and out."—NYTimes

"Pinkney suggests that the world is better when everyone can follow his or her own gifts."—Publishers Weekly (starred review)

"Grasshopper arrives on the cover with bass drum and cymbals on his back, concertina between his midlegs, and forelegs strumming his banjo. 'Why work so hard?' he sings to some busy ants. 'It's spring and time to go fishing.' But the ants, gathering food for winter, have no time to relax. In summer, the ants decline Grasshopper's invitation for a leafy picnic and some music, and his fall solicitation to 'come dance and sing!' in the 'playground of leaves' finds no takers. When snowflakes fall, Grasshopper builds a 'snow-hopper,' then sits freezing with forelegs and midlegs crossed over vest-covered abdomen, while the ants can be seen knitting, stoking the fire, and caring for their young in a cozy tree trunk home. Eventually invited inside by the Ant Queen, fun-loving Grasshopper gladly shares his musical talents with the amiable colony, then sits down to songs, tea, and cookies with the queen. Full-page vivid watercolor paintings bustling with natural activity and fanciful detail flow through the hues of the seasons, ending in the spare whiteness of winter. Fine line pencil-drawn strings and frets on his banjo, intricate snowflake shapes, the lace of a dragonfly's wings, and the colorful flow of musical bars all demonstrate Pinkney's painstaking concern with detail. So does the way a small bit of leafy scenery on the lower front flyleaf blends perfectly into the spring woodland greenery on the endpapers."—School Library Journal (starred review)