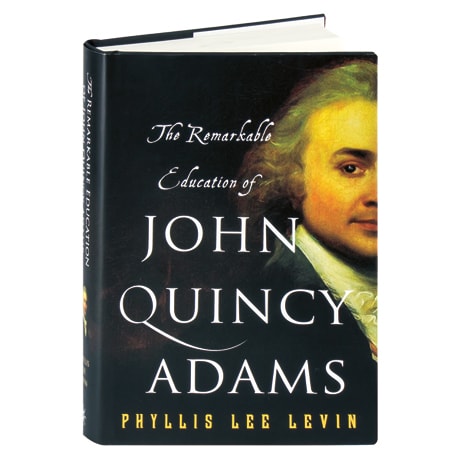 A patriot by birth, the first son of John and Abigail Adams, John Quincy Adams (1767–1848) was virtually foreordained for public life. Here the author of Abigail Adams chronicles our sixth president's earlier diplomatic career, beginning with his adolescent years as his father's secretary in Europe, where he became fluent in several languages and knew such founding fathers as Benjamin Franklin and Thomas Jefferson. John Quincy was George Washington's pick for minister to the Netherlands in 1793; John Adams appointed his son minister to Prussia in 1797; and in 1809, James Madison sent him to Russia, where he earned the sterling reputation that would lead James Monroe to name him Secretary of State. In addition to recounting his fascinating career, Phyllis Lee Levin finds keys to John Quincy's character in his family life and his troubled though loving marriage.

"Heartfelt and distinguished.... A study of the first half of John Quincy's life and times that's as concerned with the inner man as with his increasingly remarkable public achievements."—Washington Post

"Balanced, compelling, and wise. Levin brings Louisa Catherine Adams, Adams's troubled wife, into the center of the picture, where she belongs, and the author is shrewd about family dynamics."—Publishers Weekly

"Levin crafts an intimate portrait of a bookish, devoted young patriot who struggled to balance filial duties to doting parents, a troubled marriage to a wife whose own writings reveal her inner turmoil, and an ambitious career."—Library Journal