Roosevelt and Stalin: Portrait of a Partnership 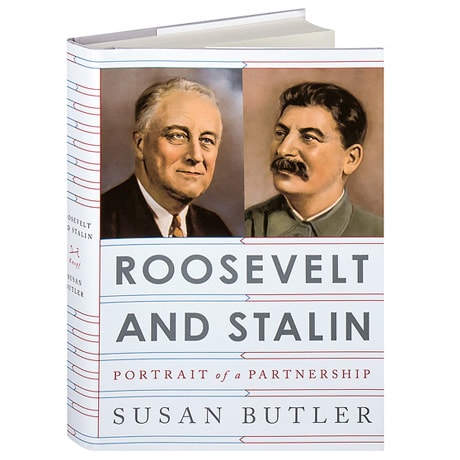 Roosevelt and Stalin: Portrait of a Partnership

The editor of My Dear Mr. Stalin: The Complete Correspondence of Franklin D. Roosevelt and Joseph V. Stalin here explores in depth the complex partnership during World War II between FDR and Stalin. Reassessing how the two men formed an uneasy but deep friendship, and how they shared the same outlook for the postwar world, Susan Butler reveals how Stalin's view of Roosevelt evolved, and how he began to see FDR as the key to a peaceful world, agreeing to participate in Roosevelt's vision of the United Nations. FDR's death affected Stalin greatly, and Butler wonders to what extent it was Churchill's—and Harry Truman's—mutual mistrust and provocation of Stalin that led to the Cold War.

"Butler effectively demonstrates that there was no greater mediator and champion of peace than Roosevelt, whose sudden death in the final months WWII robbed the world of perhaps the man who could have averted the Cold War."—Publishers Weekly

"Susan Butler's brilliantly readable book firmly places FDR where he belongs, as the American president engaged most directly in diplomacy and strategy, who not only had an ambitious plan for the postwar world, but had the strength, ambition and personal charm to overcome Churchill's reluctance and Stalin's suspicion to bring about what was, in effect, an American peace, and to avoid the disastrous consequences that followed the botched peace of Versailles in 1919. It is at once a long overdue tribute to FDR and his vision, and a serious work of history that reads like a novel. I would rank it next to Margaret MacMillan's Paris 1919, and casts new light on the character and war aims of Stalin, Churchill and FDR himself. Brava!"—Michael Korda