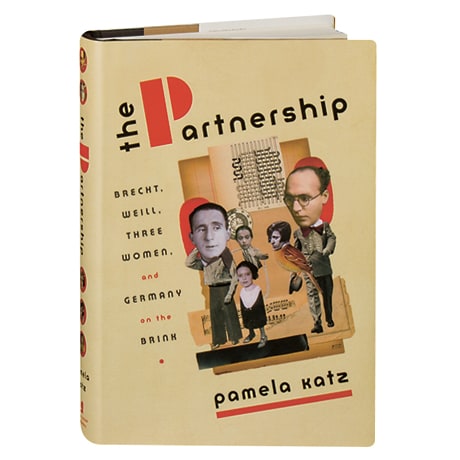 Among the most outsized personalities of the Weimar Republic (the sizzling yet decadent epoch between the Great War and the Nazis' rise to power) were renegade poet Bertolt Brecht and rebellious avant-garde composer Kurt Weill. These young geniuses joined with actresses Lotte Lenya and Helene Weigel and writer Elizabeth Hauptmann to create the theatrical masterworks The Threepenny Opera and The Rise and Fall of the City of Mahagonny, only to split in rancor as their culture cracked open and their aesthetic and temperamental differences became irreconcilable. A novelist and screenwriter (whose collaborations with director Margarethe von Trotta include Rosenstrasse, The Other Woman, and most recently Hannah Arendt), Pamela Katz chronicles Brecht and Weill's impulsive, combustible partnership, revealing the psychological drama of one of the most important creative collaborations of the past century.

"[The author's] work as a novelist and screenwriter helps her keep the pacing swift and the prose dynamic—the chapters on the creation of The Threepenny Opera are almost unbearably suspenseful.... She offers a real and empathetic sense of how Brecht and Weill walked and spoke and dressed."—NYTimes

"Katz restores the women to their proper place in the story, with levity, strong characterization, and beguiling descriptions of an interwar German milieu crackling with politics, art, and a sense of possibility."—The New Yorker

"The culture of Weimar Germany is at its most provocative and profound in this scintillating portrait of its leading theatrical luminaries.... Katz gives an uproarious view of the ferment of interwar Berlin's theatrical avant-garde, with Brecht's tantrums, power plays, preening demands, and ideological conceits. But she also takes seriously the artistic and political ideas that drove Brecht and Weill to their innovations (and eventually estranged them). The result is a thoughtful, entertaining recreation of a watershed moment in 20th-century theater."—Publishers Weekly