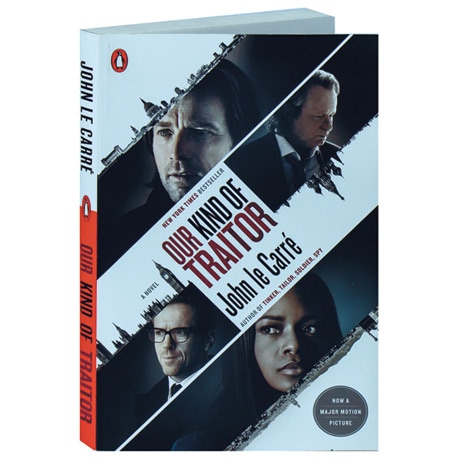 In the wake of the 2008 financial collapse and with Britain on the brink of economic ruin, Perry and Gail, a young English couple, take a vacation in Antigua, in John le Carré's 2010 thriller—the inspiration for the film of the same name starring Ewan McGregor and Naomie Harris. Perry and Gail meet Dima, a Russian who styles himself the world's Number One money-launderer and who wants, among other things, a game of tennis. Back in London, the couple is subjected to an interrogation by the British Secret service, who also need their help, and soon will become pawns in a game of nations that reveals the corrupt alliances between the Russian mafia, the City of London, the government, and the competing factions of the British Secret Service.

"Part vintage John le Carré and part Alfred Hitchcock.... The suspense in Our Kind of Traitor is genuine and nerve-racking."—NYTimes

"One of our great writers of moral ambiguity, a tireless explorer of that darkly contradictory no-man's land.... Our Kind of Traitor brims with deftly drawn characters navigating a treacherously uncertain landscape that seems ripped from yesterday's papers and re-created with an absolutely certain hand."—LATimes

"Those readers who have found post–Cold War le Carré too cerebral will have much to cheer about with this Russian mafia spy thriller. While on holiday in Antigua, former Oxford tutor Perry Makepiece and his lawyer girlfriend, Gail Perkins, meet Dmitri 'Dima' Vladimirovich Krasnov, an avuncular Russian businessman who challenges Perry to a tennis match. Even though Perry wins, Dima takes a shine to the couple, and soon they're visiting with his extended family. At Dima's request, Perry conveys a message to MI6 in England that Dima wishes to defect, and on arriving home, Perry and Gail receive a summons from MI6 to a debriefing. Not only is Dima a Russian oligarch, he's also one of the world's biggest money launderers. Le Carré ratchets up the tension step-by-step until the sad, inevitable end. His most accessible work in years, this novel shows once again why his name is the one to which all others in the field are compared."—Publishers Weekly (starred review)