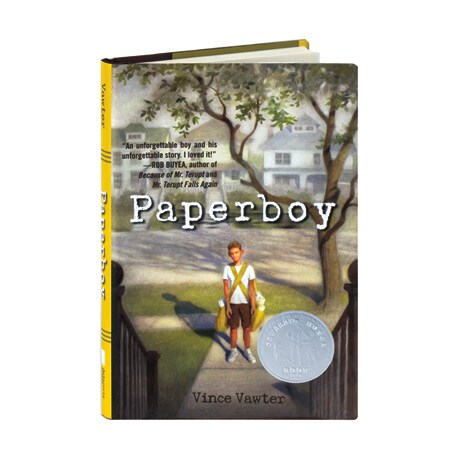 (A 2014 Newbery Honor Book, as well as a Bank Street College of Education Best Book of the Year and a BookPage Best Children's Book) Little Man throws the meanest fastball in town. But talking is a whole different ball game; he can barely say a word without stuttering—not even his own name. So when he takes over his best friend's paper route for the month of July, he's not exactly looking forward to interacting with the customers, although it's the neighborhood junkman—a bully and thief—who stirs up real trouble in Little Man's life. Vince Vawter's debut novel, for readers 11 to 14, is the moving, page-turning story of a boy and his struggle to speak.

"It's hot in Memphis during the summer of 1959—in all kinds of ways. Things heat up for the book's 11-year-old narrator when he takes over his pal Rat's paper route; meeting new people is a horror for the boy because he stutters. He only really feels comfortable with Rat and Mam, the African American maid who takes care of him when his parents are away, which is often. But being the paperboy forces him to engage in the world and to ask for payments from customers, like pretty, hard-drinking Mrs. Worthington and Mr. Spiro, who gives the boy the confidence to voice his questions and then offers answers that—wondrously—elicit more questions. Others intrude on his life as well. In a shocking scene, Ara T, the dangerous, disturbing junk man tries to take something precious from the boy. In some ways, the story is a set piece, albeit a very good one: the well-crafted characters, hot Southern summer, and coming-of-age events are reminiscent of To Kill a Mockingbird. But this has added dimension in the way it brilliantly gets readers inside the head of a boy who stutters. First-time author Vawter has lived this story, so he is able to write movingly about what it's like to have words exploding in your head with no reasonable exit. This paperboy is a fighter, and his hope fortifies and satisfies in equal measure."—Booklist (starred review)