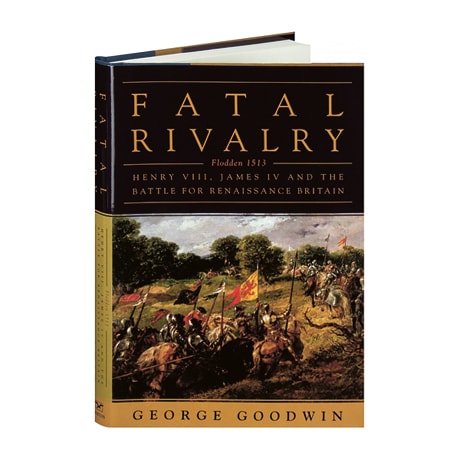 Following Fatal Colours: Towton 1461, historian George Goodwin here takes us back to Flodden in the northernmost corner of England, where the greatest and bloodiest Anglo-Scottish battle in British history was fought in 1513. Centuries of personal and political tensions between the kingdoms culminated in the bitter rivalry of the charismatic James IV of Scotland and his brother-in-law, the ambitious, hot-headed Henry VIII. Goodwin portrays the Renaissance splendor of both royal courts—their wealth, innovation, and artistic expression—and deploys a fascinating if treacherous cast of self-serving ministers, cynical foreign allies, and plotting cardinals, while contrasting the queens, Katherine of Aragon and Margaret Tudor."While England's Henry VII sought to keep the peace, even giving his daughter Margaret in marriage to Scotland's James IV, Henry VIII took the English throne in 1509 as a teenager eager for glory. The monarchic brothers-in-law had much in common, and both were masters of majestic display, argues Goodwin, but while the more mature James regarded the display of might as a substitute for war, Henry regarded it as preparation for battle. Goodwin's detailed account of the events leading up to the clash at Flodden on Sept.', 1513, places James at the center of the story, and it provides a fresh and provocative take on the intertwined histories of Tudor England and Stuart Scotland."—Publishers Weekly