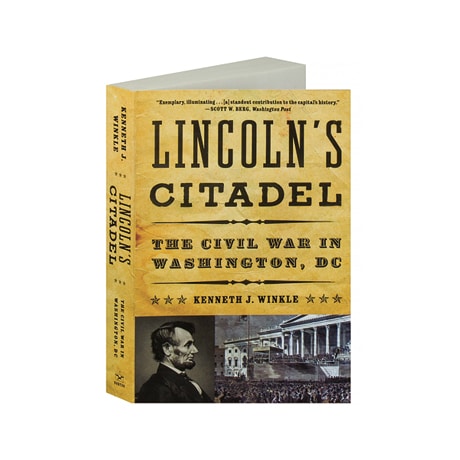 In the late 1840s, Representative Abraham Lincoln resided on Capitol Hill at Mrs. Sprigg's boardinghouse, known as "Abolition House," where congressional boarders held lively dinner-table debates of antislavery politics. From the White House, just 12 years later, Lincoln could see the Confederate flag flying just across the Potomac. Washington, D.C., was literally on the front line of the Civil War, and the city was rife with Confederate sympathizers. Lincoln biographer Kenneth Winkle takes us back to the capital in war, vividly observing particular scenes as the Lincoln administration met the immense challenges posed to the vulnerable city, transforming it into a bastion for the Union.

"During the Civil War, Washington, D.C., was a boomtown. Against the distant sound of cannon fire, the city multiplied in size as various groups of people flowed in. Office seekers, military casualties, and escaping slaves lent the city a turbulent wartime sociology that Winkle probes. First, however, he depicts antebellum Washington during Abraham Lincoln's 1847–49 term in Congress. Recounting Lincoln's and fellow antislavery politicians' encounters with the peculiar institution, Winkle underscores the complicated legal conditions imposed on blacks, free and enslaved. He carries the legal scaffolding of D.C. slavery into the war years, when Congress abolished it by gradations, and details each step's ramifications on Washington's blacks and whites. Lincoln's personal and political part in these proceedings does not dominate but rather supplements Winkle's narratives of people drawn into the city as battle casualties or fugitives from slavery. His anecdotes of individual cases usefully illustrate his deployment of statistics about hospitals and refugee camps.... Winkle's history modernizes a story ever attractive to Civil War readers."—Booklist