Our Declaration: A Reading of the Declaration of Independence in Defense of Equality 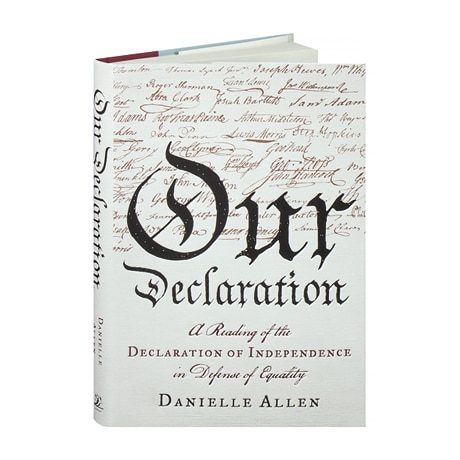 Our Declaration: A Reading of the Declaration of Independence in Defense of Equality

(Winner of the Francis Parkman Prize and the Zócalo Book Prize and a finalist for the 2015 PEN/John Kenneth Galbraith Award) In just 1,337 words, the Declaration of Independence altered the course of history. Troubled by the fact that so few Americans actually know what it says, political philosopher Danielle Allen set out to explore the arguments of the Declaration, reading it with her University of Chicago students. Though it is riddled with contradictions—liberating some while subjugating slaves and Native Americans—Allen and her students found that the Declaration makes a coherent and riveting argument about equality, a word all but forgotten as politicians and pundits trumpet for "freedom," yet just as essential to the stability of our nation. Vividly evoking the colonial world, Allen describes the challenges faced by John Adams, Thomas Jefferson, Benjamin Franklin, Roger Sherman, and Robert Livingston, the "Committee of Five" who had to write a document that reflected the aspirations of a restive population and forge an unprecedented social contract. Although the focus is usually on Jefferson, Allen restores credit not only to John Adams and Richard Henry Lee but also to clerk Timothy Matlack and printer Mary Katherine Goddard. The Declaration's list of self-evident truths does not end, as so many think, with our individual right to the "pursuit of happiness" but with the collective right of the people to reform government so that it will "effect their Safety and Happiness." That sentence leads us from the individual to the community, argues Allen—from our individual rights to what we can achieve only together, as a community constituted by bonds of equality. Challenging so much of our conventional political wisdom, the book boldly makes the case that we cannot have freedom as individuals without equality among us as a people.

"A primer on all that we have been missing ... not just an invaluable civics lesson but also a poignant personal memoir.... Allen is an evangelist for this romantic moment in American history when men of uncommon vision and political deftness stated their case and listed their grievances against the most powerful nation on Earth."—Washington Post

"Allen's insights into the significance of equality in America—from the 18th century to the present—make Our Declaration the 2014 nonfiction book that best enhances our understanding of the forces that strengthen or undermine community and human connection.... In her close reading of the Declaration of Independence, Allen asserts that the document's primary argument is not merely about the importance of freedom, but of equality, too. Contemporary political discourse has largely cast this ideal aside, in favor of defending individual rights above all. 'Such a choice is dangerous,' writes Allen in the prologue to Our Declaration. 'If we abandon equality, we lose the single bond that makes us a community, that makes us a people with the capacity to be free collectively and individually in the first place.' Our Declaration explores the importance Thomas Jefferson and his contemporaries placed on equality and community, and how ... they forged a document with the power to build a cohesive and united nation."—ZócaloPublicSquare.org