Lucky Planet: Why Earth is Exceptional—and What That Means for Life in the Universe 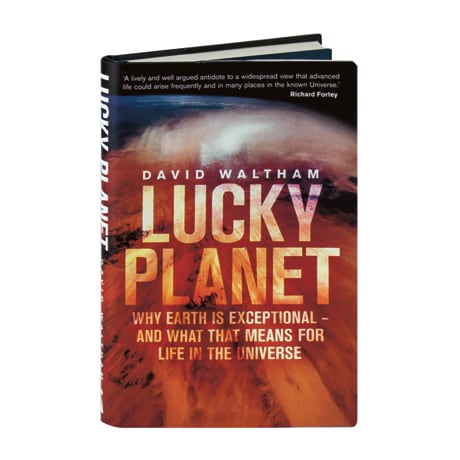 Lucky Planet: Why Earth is Exceptional—and What That Means for Life in the Universe

Humankind has long fantasized about life elsewhere in the universe, and as we discover more and more exoplanets orbiting other stars, we are ever more hopeful that we may find signs of extraterrestrial life. Yet it has also become clear that Earth somehow is exceptional. Astrobiologist David Waltham posits that earth's climate stability is in fact remarkable, and so statistically unlikely that chances are slim that we will ever encounter intelligent extraterrestrials. Describing the three factors that typically control a planet's average temperature—the heat received from its star, how much heat the planet absorbs, and the concentration of greenhouse gases in the atmosphere—Waltham paints a complex picture of how special Earth's climate really is, and the surprising role chance plays in our place in the universe.

"A lively and well-argued antidote to a widespread view that advanced life could arise frequently and in many places in the known Universe. Waltham explains why the Earth is a much more peculiar planet than you might think, and he shows that its friendliness to life does not just apply to the here-and-now, but must equally have pertained through a history of more than 3.5 billion years: life's survival and prospering to the point where intelligent life could emerge was a product of extraordinary and exceptional luck. A skeptical response to ideas of inevitable evolution of intelligent beings among the stars, Waltham suggests that we may, after all, be lonelier than we could have thought."—Richard Fortey

"Waltham has an engaging, pleasantly meandering, style of writing, making his book accessible to the non-specialist. He shows a knack for clearly explaining complex concepts—for example, geologic time scales and exoplanet detection techniques."—Quest: The History of Spaceflight Quarterly