Don't Give Up, Don't Give In: Lessons from an Extraordinary Life 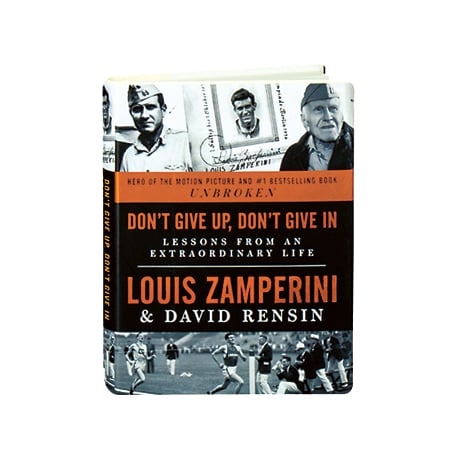 Don't Give Up, Don't Give In: Lessons from an Extraordinary Life

Completed just two days before his death at age'7, Louis Zamperini's second memoir (following Devil at My Heels, also co-written with David Rensin) shares a lifetime of wisdom, insight, and humor from his inspiring life. His determination and courage were widely celebrated following Laura Hillenbrand's biography Unbroken and the subsequent motion picture from Angelina Jolie; here in his own words, with engaging warmth and charm, Zamperini reveals the essential values and lessons that sustained him on his journey from a rough-and-tumble youth to becoming a 1936 Olympic champion, a volunteer army pilot in the Pacific Theater, a castaway adrift on a raft for seven weeks after being shot down, and a prisoner tortured by the Japanese for years. Even after he returned home, Zamperini faced more dark days, but in 1949 he was transformed by a spiritual rebirth that would guide him through the next 65 years of his long and remarkable life.

"Not simply another rehashing of Zamperini's incredible history, this second memoir, dictated to co-author Rensin during the last year of the author's life, brims with sage wisdom, learned advice and fond observations from his adventurous'7 years."—Kirkus Reviews