Rest for the Wicked: A Jane Lawless Mystery 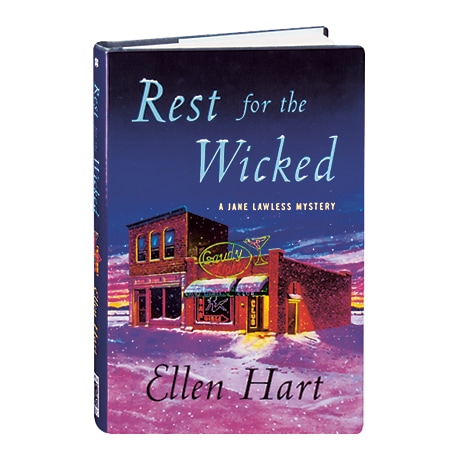 Rest for the Wicked: A Jane Lawless Mystery

DeAndre Moore came to Minneapolis from St. Louis with a purpose, but things aren't going as planned. When it becomes clear that he's in over his head, he can think of only one person to call for help: his Uncle Nolan's business partner, newly licensed private investigator Jane Lawless, in her 20th mystery by MWA Grand Master Ellen Hart (following The Lost Women of Lost Lake). But by the time Jane plays DeAndre's voice mail, she's hearing him from beyond the grave, as he left the message only minutes before he was knifed to death outside a gentlemen's club—nor is his the only murder. With Nolan in the hospital, Jane sets out on her own to find out who killed DeAndre and why he was in Minneapolis in the first place.

"Minneapolis restaurant-club owner and former amateur sleuth Jane Lawless has her 'first official case as a licensed PI,' investigating the death of a colleague's nephew. Her workaholic lover, who sees Jane's superworkaholism as 'world class' and makes her 'feel guilty for the way she lives,' dumps her, leaving the lesbian detective yearning for a deeply passionate, emotional rush. Enter Avi, the attractive bartender at the local strip lounge, where Jane blushes while questioning possible leads in her investigation. Never shy, raucous theatrical artistic director Cordelia, one of crime fiction's most memorable sidekicks, accompanies her in a 'striped, double-breasted men's suit ... gansta gaudy' as the convoluted plot engagingly unfurls, complete with Ecstasy-laced drinks. Cordelia embarks on a new career, and Jane suddenly finds herself crazy in love with a woman she's known only for a few days and never kissed. Stay tuned for the next installment, fans."—Booklist