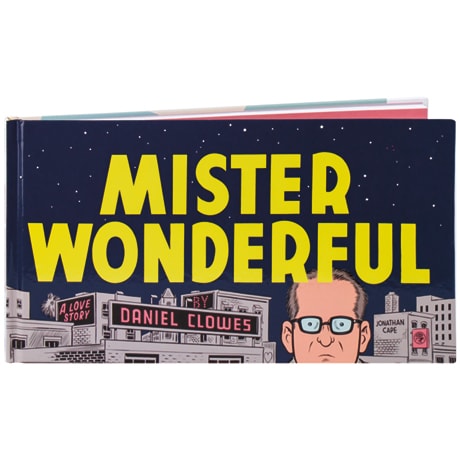 Divorced, middle-aged, newly unemployed, Marshall sits alone in the local coffee shop, set up by his friend Tim on a blind date with someone named Natalie. After nearly an hour, when he's long since given up hope, Natalie appears—breathless, apologizing profusely that she went to the wrong place—and takes a seat. To Marshall's utter amazement, she's too good to be true: attractive and intelligent, she seems to actually be engaged with what Marshall has to say; there has to be a catch. And of course, there is, this being a graphic novel by Daniel Clowes (who also gave us Ice Haven, Wilson, and Patience). During the extremely long night that follows, Marshall and Natalie are emotionally tested in ways that two people who just met really should not be, in a captivating, bittersweet, and hilarious look at the potential for human connection in an increasingly hopeless world.

"Over the course of the evening, nearly everything that could go wrong with a tentative flirtation does, including a mugging and a really bad party. Expanded from a serial that ran in the New York Times Magazine, this is a gorgeously staged graphic novella consistently playful and funny on a formal level—there's a running joke involving Marshall's interior monologue covering up images or dialogue, and constant fantasy sequences signaled by drawing-style shifts. It's also the most tightly focused and sweet-tempered of Clowes's books so far, the closest thing he's done to a Woody Allen movie."—Publishers Weekly (starred review)