First to Fly: The Story of the Lafayette Escadrille, the American Heroes Who Flew for France in World War I 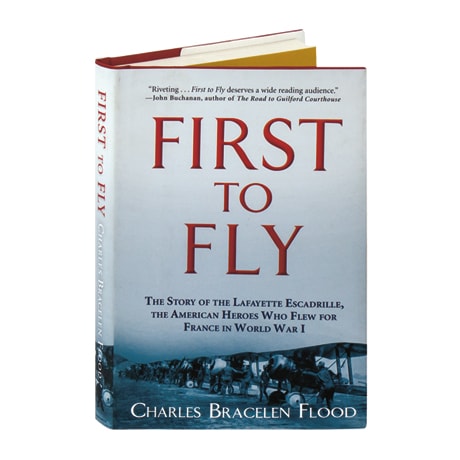 First to Fly: The Story of the Lafayette Escadrille, the American Heroes Who Flew for France in World War I

If the Wright brothers' 1903 flights in Kitty Hawk marked the birth of aviation, World War I can be called its violent adolescence—a brief but bloody era that completely changed the way planes were designed, fabricated, and flown. Historian and novelist Charles Bracelen Flood tells the story of the American volunteers at the forefront of that revolution: the daredevils of the Lafayette Escadrille, who flew in French planes, wore French uniforms, and projected an American brand of heroism long before the United States entered the Great War. As citizens of a neutral nation, from 1914 to early 1917, Americans were prohibited from serving in a foreign army, though many adventurous souls soon made their way into European battle zones, whether as ambulance drivers, nurses, or as soldiers in the French Foreign Legion. It was partly from the ranks of the latter group, and with the sponsorship of an expatriate American surgeon and a Vanderbilt, that the Lafayette Escadrille was formed in 1916 as the first and only all-American squadron in the French Air Service. Flying rudimentary planes, with one-in-three odds of being killed, these fearless young men gathered reconnaissance, shot down enemy aircraft, participated in the Battle of Verdun, and faced off in duels against the Red Baron and other talented German aces.

"Fusing his talents for narrative and characterization with a scholar's passion for research, Charles Bracelen Flood has seamlessly woven an epic story of the American airmen who served in the Great War.... An achievement of literary excellence that enlightens as it entertains."—Sidney Offit