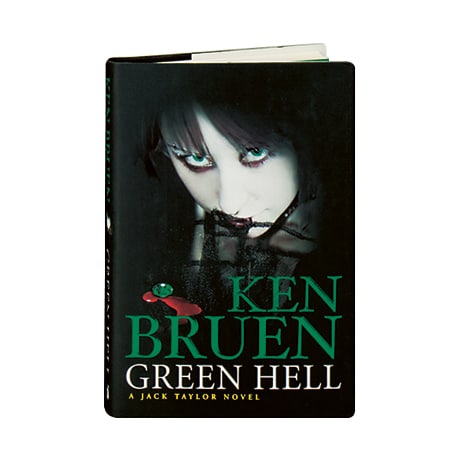 Called "the best-kept literary secret in Ireland" by London's Independent, Ken Bruen is as joyously unapologetic in his writing as he is wickedly poetic, with rapid-fire intensity. In his previous book, Purgatory, Galway ex-cop Jack Taylor had finally turned his life around, only to be taunted back into fighting corruption by a twisted serial killer dubbed C33. Here, Jack has again hit bottom, with one of his best friends dead, the other not speaking to him, and a relapse in his addiction to alcohol and pills. But when he goes vigilante against a university professor with a violent habit and friends in high places covering for him, Jack finds himself tangled up with an American Rhodes scholar and a Goth girl named Emerald.

"One sign of a winning detective series is how much fun the author has with the creation. In the 11th Jack Taylor novel, Green Hell, Ken Bruen is having a shameless good time.... Go ahead—crack open Green Hell and have some fun."—Shelf Awareness

"The Godfather of the modern Irish crime novel ... Bruen writes in machine gun fashion, his words verbal bullets that rip through the veneer of the safe bourgeois Catholic society in which he was reared.... The acerbic wit and off-the-wall comments throughout all the books are somewhat reminiscent of the work of Raymond Chandler and Peter Cheyenne."—Irish Times

"Ken Bruen doesn't need a lot of words to tell his tales of perpetually falling Irish angel Jack Taylor—he knows the right ones. Bruen gets more done in a paragraph, a word, even a fragment of a word, than most writers get in an entire four-hundred page doorstop. If his prose was any sharper, your eyeballs would bleed."—Mystery Scene