Voices in the Ocean: A Journey into the Wild and Haunting World of Dolphins 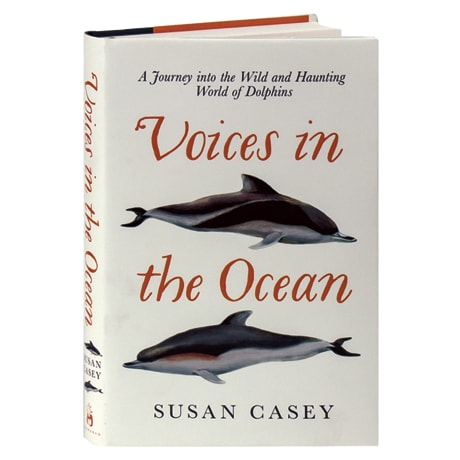 Voices in the Ocean: A Journey into the Wild and Haunting World of Dolphins

While swimming off the coast of Maui, Susan Casey was surrounded by a pod of spinner dolphins, a profoundly transporting experience that inspired her to embark on a global adventure to explore the nature of these remarkable beings and their complex relationship with humanity. Dolphins recognize their reflections, adorn themselves, rescue one another (and humans), count, deduce, infer, grieve, seduce, feel despondent, form cliques, throw tantrums, and call themselves by name. Marine researchers experience a sense of wonder as they study dolphins, which only increases as they discover more. Yet we also capture and imprison them, force them to perform, and round them up for slaughter. Casey—also the author of The Wave and The Devil's Teeth—wonders if the ancient Minoans, who lived in harmony with dolphins, might show us the way to share our world with the other intelligent life form on the planet.

"What starts out as a feelgood, new-agey account darkens like the sunlight diminishing in the deep, subtly turning into a devastating chronicle of one of the most egregious mismatches in natural-human history. The result is a brilliantly written and passionate book ... timely and urgent."—Guardian (London)

"A meticulously reported global odyssey during which [the author] sets out to answer the simple question: why do dolphins elicit such intense emotions and behaviors in humans? ... Fans of Casey's writing know that she has an inexhaustible curiosity and a knack for fully embracing her subject."—Outside Magazine