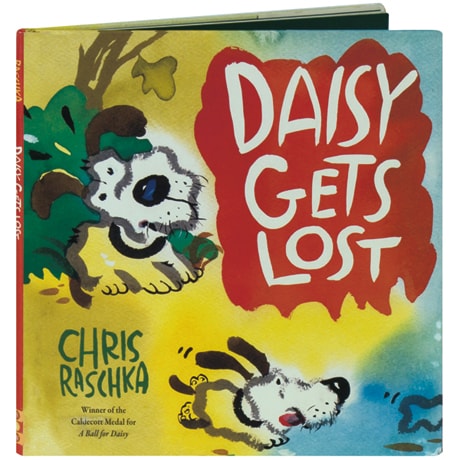 (A Junior Library Guild Selection) Daisy is back! The sweet pup who starred in A Ball for Daisy—winner of the Caldecott Medal and a New York Times Best Illustrated Book of 2011—here helps readers up to 7 understand the fear and confusion of being lost. In a nearly wordless book of bold brush-painted cartoons, Daisy realizes that she has ended up in an unfamiliar part of the park after chasing a squirrel. Fortunately, her unease soon leads to the joy of being found, as Daisy's young mistress discovers her.

"Nearly wordless like its predecessor, this evocative story depicts another misadventure in the park. While playing fetch with her human and her new blue ball, Daisy sees a squirrel. In typical doggie fashion, she merrily chases the critter into the woods and gets lost. Frantic, she howls and looks for the child while the youngster searches for her. The two find each other in the end, though Daisy is still eyeing that pesky squirrel. A clever mix of layouts—mostly full spreads, occasionally changing to two to eight panels across two pages—propels the action. As in his previous work, Raschka masterfully imbues his ink, watercolor, and gouache illustrations with a stunning range of emotions. With a few brushstrokes, he captures the excitement in the lolling canine tongue, the alarm and anguish of being lost, the relief and joy of the cozy reunion. Whether a cautionary tale or one familiar to any pet owner, this book is a must for Daisy fans everywhere."—School Library Journal (starred review)