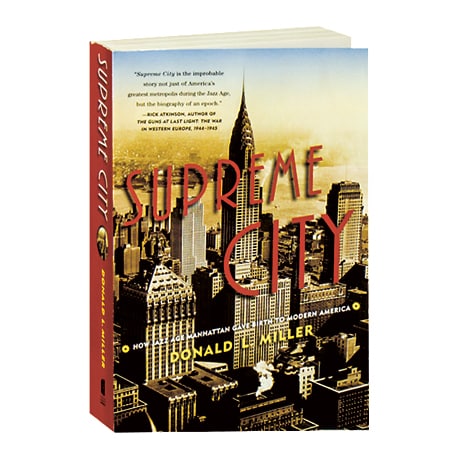 Through the Roaring 20s, midtown Manhattan was the center of a construction boom that changed the character of the city. The area around Grand Central Terminal became home to the tallest skyscrapers on earth, as well as a chic new high-rise residential street, Park Avenue, built above the terminal's railroad tracks. Times Square became America's movie mecca, while radio and recording industries grew and cosmopolitan magazines like The New Yorker became the nation's tastemakers. Also the author of City of the Century and Masters of the Air, Donald Miller takes us back to the moment when New York became, in the words of Duke Ellington, "the capital of everything."

"Donald L. Miller has long been one of my favorite historians. Anyone who reads Supreme City will understand why. Miller brilliantly examines the birth of Midtown Manhattan during the glorious Jazz Age. It's the story of how a gaggle of success-hungry out-of-towners—including Duke Ellington, Walter Chrysler, E.B. White, and William Paley—turned the Valley of Giant Skyscrapers near Grand Central Terminal into the symbolic epicenter of wealth, power, and American can-do-ism."—Douglas Brinkley