The Game of Thirty 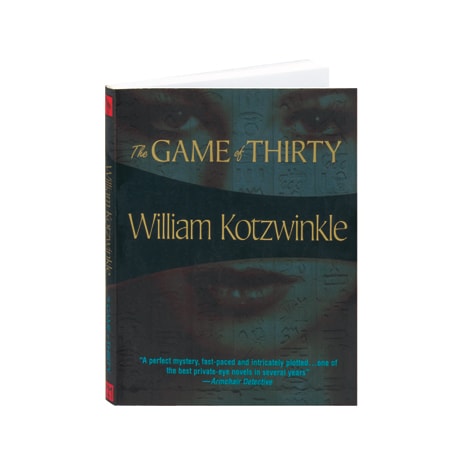 The Game of Thirty

In a rare turn writing genre fiction, National Magazine Award and World Fantasy Award winner William Kotzwinkle introduces us to Manhattan private eye Jimmy McShane, a guy who's seen it all—until he looks into the murder of antiques dealer Tommy Rennseler, who was injected with cobra venom and ritually disemboweled in the manner of an Egyptian mummy. Hired by the dead man's daughter, Temple Rennseler—beautiful, exotic and perhaps extremely dangerous—McShane discovers her obsession with the Game of Thirty, an ancient form of chess that supposedly foretells your fate. The more enmeshed he becomes with Temple, the more McShane succumbs to the lure of the game—but just what game is Temple playing?

"A suspense novel to rank with the classics of the genre.... It is by turns funny, sad, infuriating, and as smoothly ominous as a serpent's egg. This is top-level entertainment; a page- turner that will keep its luster—and its mystery—long after the last page is turned."—Stephen King

"When a first-class mainstream writer turns his hand to genre fiction, the results are seldom mediocre. They're usually either spectacular or awful. Like Richard Brautigan's Dreaming of Babylon, Kotzwinkle's venture into crime fiction is first rate, a delight to read and a successful attempt to expand the horizons of the genre.... Laced with a liberal measure of Kotzwinkle's signature wit, this multileveled story is imaginatively constructed and populated with an engaging menagerie of characters both fair and foul. Unique and compelling."—Booklist

"The Game of Thirty is an ancient Egyptian board game in which the movement of pieces, according to the casting of bone dice, foreshadows events in the lives of the players. In Kotzwinkle's noir novel for the 1990s, Manhattan is the ersatz playing board, and antiquities dealer Tommy Rennseler is a player whose piece was moved to the square of Rebirth ('your piece dies and has to start all over again') on the night he was injected with cobra venom and disemboweled. High-tech detective Jimmy McShane is hired by Rennseler's daughter Temple to find her father's murderer. Aided by his office mate, Ann Henderson, a chiropractor with a New Age outlook and a talent for Sherlockian deduction, McShane moves around the city/board trying to discover who his opponent is. More murders and a suspect's involvement in child prostitution seem to sidetrack the plot, but in the end, all pieces, players and moves prove necessary to Kotzwinkle's resolution. McShane, Henderson and the supporting cast are fully three-dimensional and memorably idiosyncratic. In this game of 30, the reader is the winner, no contest."—Publishers Weekly