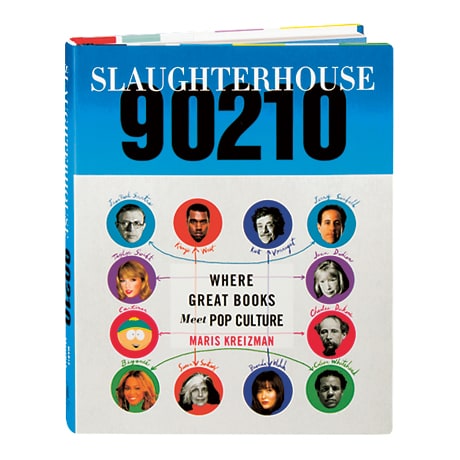 It's where your Netflix account meets your library card. Inspired, once she realized that a scene in the reality television show The Hills reminded her powerfully of the words of Virginia Woolf in To the Lighthouse ("Never did anybody look so sad. Bitter and black ... perhaps a tear formed; a tear fell; the waves swayed this way and that, received it, and were at rest."), former book editor Maris Kreizman launched her blog Slaughterhouse 90210 to pair such moments of pop culture and great literature. A picture of Taylor Swift is paired with Joan Didion's quote, "Above all, she is the girl who 'feels' things, who has hung on to the freshness and pain of adolescence, the girl ever wounded, ever young," while Tony Soprano tenderly touches his teenage son, accompanied by a line from Middlemarch: "It is curious what patches of hardness and tenderness lie side by side in men's dispositions." More than 140 of these connections are presented here, in an irresistibly browsable, hilarious, surprisingly insightful album.

"A real live cultural argument and an important one, inventively made.... What Slaughterhouse 90210 does, in a gentle and curious way that distinguishes it utterly from many similarly formatted books, is to push those connections forward. It's fun and funny, yes, but also surprising, moving, and thoughtful. It's a book that makes, in many ways, the argument for precisely the kind of work that it is."—NPR