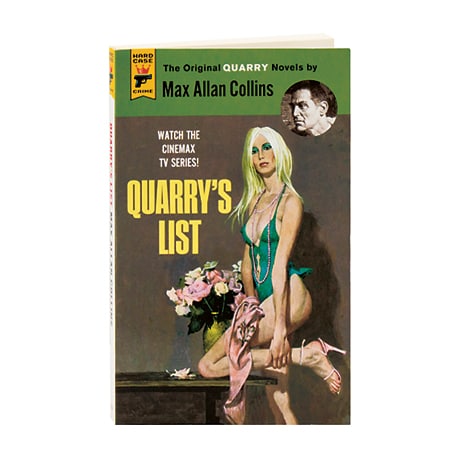 In this second Quarry book—originally published in 1976 as The Broker's Wife, the sequel to The Broker—the former Marine sniper finds himself in the crosshairs after the man he worked for abruptly exits the contract killer business. It seems a rival intends to take over—but what does Quarry have that the new man wants? And how did the beautiful blonde in the swimming pool become a target? Max Allan Collins's hard-boiled thriller series—about a paid assassin with a rebellious streak and an unlikely taste for justice—inspired the Cinemax crime drama series of the same name.

"A brisk page-turner that works well as a prequel for readers who are only familiar with more recent titles in the series. The book opens with Quarry being stalked in his Wisconsin home by two killers. They were ostensibly sent by someone who believes Quarry was responsible for the murder of the Broker, the middleman who gave Quarry his lethal assignments. After surviving the encounter, Quarry follows a lead to Davenport, Iowa, where his efforts to stay alive are complicated by an attractive woman who crosses his path. The story line is deceptively simple. As usual, Collins imbues even walk-on characters with personality. This reissue is a good entry point to the series for fans of gritty crime fiction, and showcases some of the prolific Collins's best work. Making a stone-cold killer sympathetic isn't easy, but Collins pulls it off."—Publishers Weekly