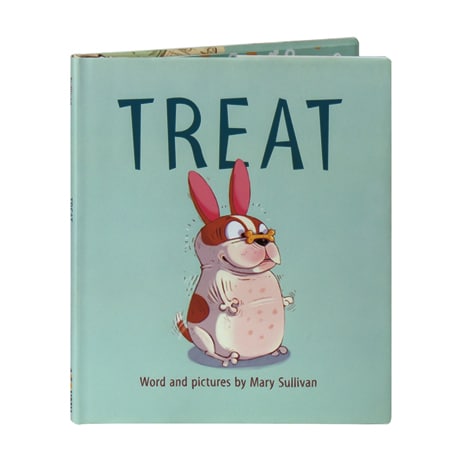 In this follow-up to her Theodor Seuss Geisel Honor Book Ball, Mary Sullivan again gives us a window into a dog's life, depicting a canine obsession through hilarious cartoons and a single word: "treat." This story for prereaders begins with a waft of aroma, and a brown-spotted bulldog is suddenly wide awake and ready to help a toddler eat her cereal. "Treat?" he quivers, and performs every trick he can think of, but she eats the last bite herself. Her sister is no better, nor their brother. At least the baby has a bottle—though the pup can't reach it. Dejected, he falls into dreams where the treats begin chasing him. But never fear: the toddler who teased him and the sister who ignored him are not without mercy, and have whipped up a true treat for their favorite chowhound.

"Sullivan has created quite a treat herself: a canine hero with a one-track mind and an endlessly expressive one-word vocabulary (aided by comically frenetic typography) whose approach to thwarted desire is, as any child will recognize, all too human."—Publishers Weekly (starred review)