The Heart of Everything That Is (Young Reader's Edition) 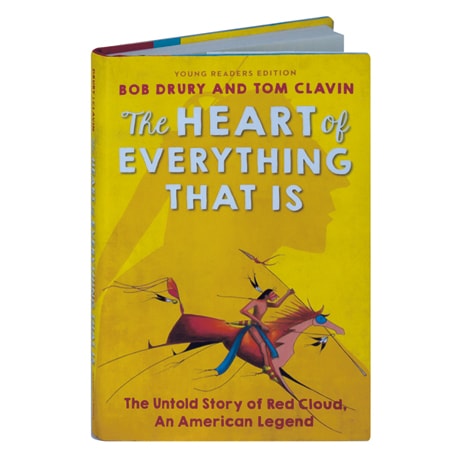 The Heart of Everything That Is (Young Reader's Edition)

Journalists Bob Drury and Tom Clavin here offer a young adult edition of their gripping, vividly reported 2013 biography of Red Cloud, for readers 10 and up. The great Sioux warrior-statesman was the only American Indian to defeat the U.S. Army and force the government to sue for peace on his terms, following an 1866-68 war—later to be known as Red Cloud's War. It began over encroachment on the sacred Black Hills of Dakota, and culminated in a devastating rout of American troops, sending a warning to Washington that the Plains Indians would fight, and die, for their land and traditions. Though his story was obscured in the saga of western expansion, Red Cloud's 1893 autobiography resurfaced a century later, and became the basis for The Heart of Everything That Is (published in Britain as Red Cloud). "Red Cloud is one of the great figures in 19th-century America's tortured relationships with the many peoples who occupied our country before we took it," wrote Ken Burns of the original edition. "Finally, there is a portrait worthy of the man, fully drawn and realized, all the complicated undertow acknowledged and embraced."

"The carefully adapted young readers' version of [the authors'] adult book ... reads like an adventure tale. By recounting the story of one warrior, the books retells the tragic story of an infamous frontier conflict from an oft-ignored perspective."—Booklist