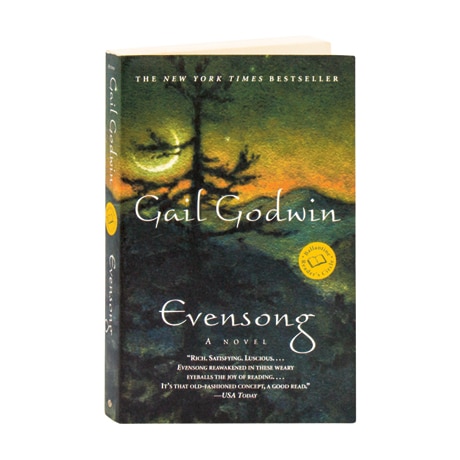 In this sequel to Father Melancholy's Daughter, the author of the National Book Award finalists The Odd Woman, Violet Clay, and A Mother and Two Daughters takes us back to the town of High Balsam in the Smoky Mountains, where Margaret Bonner has grown up and taken her father's place as the minister of All Saints Episcopal Church. Contemplating her own shaky marriage at the verge of the third millennium, Margaret finds that she has a larger perspective to consider when two outsiders—an oddball monk named Tony, and Grace Munger, an evangelical revivalist—demand her attention, as does Chase Zorn, a bright but self-destructive orphan.

"A rich new novel ... with the narrative verve and moral gravity that made earlier novels of hers so appealing."—NYTimes

"A deeply considered, even dignified novel.... As with story lines from Dickens ... you simply want to find out who does what to whom.... The final beauty of Evensong is its ability to address God—to address the mystery of faith by comprehending, then embracing, this premise of uncertainty itself."—Boston Sunday Globe

"Godwin's latest novel is as comforting and evocative as its title.... The carefully researched details of a woman minister's daily rituals are fascinating, and Godwin offers her usual insights into her characters' shifting feelings, compounded of psychological astuteness and keen empathy. Gracefully written and embracing a worldly but genuine sense of goodness and human possibility, this kind of book is rare these days."—Publishers Weekly