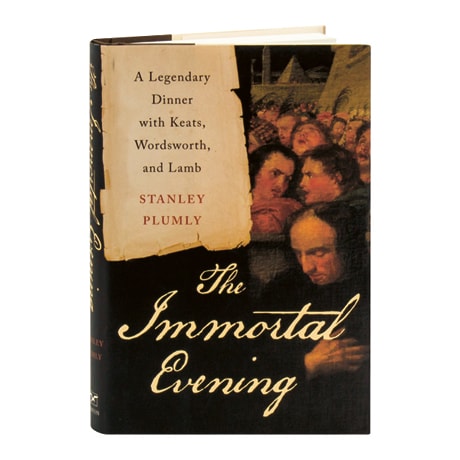 Two hundred years ago, on December 28, 1817, painter Benjamin Robert Haydon hosted what he referred to in his diaries as the "immortal dinner." He wanted to introduce his young friend John Keats to the great William Wordsworth, and to celebrate completing his historical painting, Christ's Entry into Jerusalem, in which the faces of Keats, Wordsworth, and Charles Lamb (also a guest at the party) all appeared. After discussions of poetry and art and their relation to Enlightenment science, the party evolved into a lively, raucous evening—one that would prove to be a highlight in each of their lives. Poet Stanley Plumly takes this dinner as a lens through which to understand the lives and works of these creative minds, resulting in "an essay on mortality as much as immortality" (Washington Post).

"Written with great eloquence and insight.... The colorful portrait [Plumly] paints is that of a select artistic fraternity, frequently contrary in their opinions and attitudes, who nevertheless knew that they were making a significant impact on the spirit of their age."—Publishers Weekly