The Necklace and Other Stories: Maupassant for Modern Times 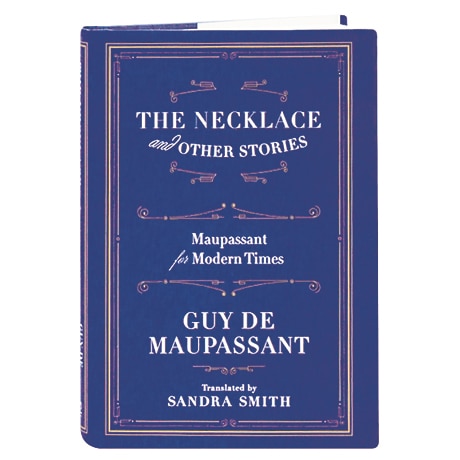 The Necklace and Other Stories: Maupassant for Modern Times

Known for her superb translations of Irène Némirovsky's work, Sandra Smith here turns to a great French writer largely unappreciated in English. Guy de Maupassant (1850–93) was a Parisian civil servant who became a protégé of Flaubert. In his brief life he wrote six novels and more than 300 short stories—indeed, he is credited with helping to define the modern short story form and as a pioneer of psychological realism—yet his English translations have tended to be stiff and literal. In this fine, deckle-edged edition Smith gives us 28 essential stories and two novellas (including the early masterpiece "Boile de Suif") that span Maupassant's major themes of 19th-century French society, the Franco-Prussian War of 1870–71, and the supernatural. Under the section Tales of French Life, we see Maupassant explore the full sweep of French society, rather than just the lives of the affluent as was customary for his time; the title story is a devastating portrait of misplaced ambition and subsequent ruin in the emerging middle class, and inspired later stories by Somerset Maugham and Henry James. The stories under Tales of War emerge from Maupassant's own experiences in the Franco-Prussian War and create a portrait of that disastrous conflict that few modern readers have ever encountered. The last section, Tales of the Supernatural, delves into the occult and the bizarre, and while some may deem Maupassant's morbid fascination as the product of a fevered mind, with possible hallucinations induced by late-stage syphilis, these stories echo the gothic horror of Edgar Allan Poe and anticipate the eerie fiction of H.P. Lovecraft.

"Sandra Smith has a sterling reputation for shaking the dust off previous translations while leaving the meaning and the feeling of a classic work of literature intact. She has succeeded again with this beloved collection of stories by Maupassant and delivered in English the vitality and excitement his first 19th-century French readers appreciated."—Alice Kaplan

"Maupassant may have known more about venality and lust than any writer of his age, and yet he remains an artist of surprising delicacy and extraordinary range. The nightmares of war and of one's own obsessions, the sorrows of marriage and love, the delusions of pride: Sandra Smith's masterful new translations show it all to us, in a language as supple and brisk as the French original itself, and her selection includes many little-known masterpieces alongside some of his most famous tales."—Michael Gorra