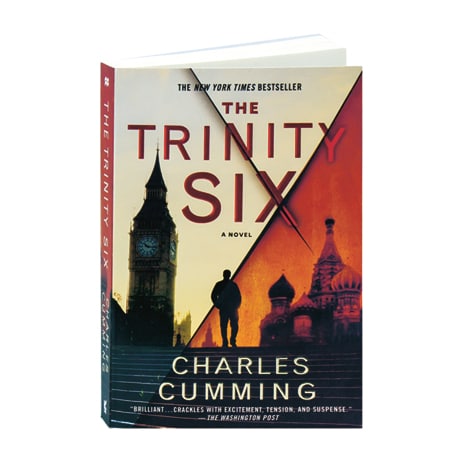 (Named a Notable Fiction Book of 2011 by the Washington Post) In 1992, Edward Crane—a "resourceful career diplomat," as his subsequent obituary would describe him—is declared dead in a London hospital. Fifteen years later, divorced and down-at-heel scholar Sam Gaddis is only too happy to help a journalist friend pursue her lead on the long-fabled "sixth man" of the infamous Cambridge Five spy ring, knowing that such a story could turn his fortunes around; within hours, she is dead. Gaddis takes over her investigation, trailing a man who claims to know the truth about Edward Crane, and unearths decades of misinformation from both sides of the Iron Curtain, approaching a revelation that could destroy the peace and security of modern Europe. This is the fifth novel from one-time MI6 recruit Charles Cumming, appearing between his 2009 New York Times Notable Book Typhoon and his 2012 Ian Fleming Steel Dagger winner A Foreign Country (the first book in the Thomas Kell trilogy).

"British author Cumming revitalizes the moribund cold war spy novel in this stunning stand-alone that centers on the 'Cambridge Five' (Guy Burgess, Donald Maclean, et al.), who betrayed their country to the Soviet Union during and after WWII. Fifteen years after 76-year-old Edward Crane is pronounced dead at a London hospital in 1992, academic Sam Gaddis learns that Crane was the oft-rumored sixth man in the Cambridge spy ring.... Gaddis, a well-regarded scholar of modern Russia who needs money to support his ex-wife and their daughter, thinks he can turn this bombshell into a bestselling book. But the people who know about it, including one of Gaddis's best friends, journalist Charlotte Berg, are turning up dead.... Cumming's knowledge of the spy business, his well-crafted prose, and his intensely engaging plot make this a breakthrough novel."—Publishers Weekly (starred review)