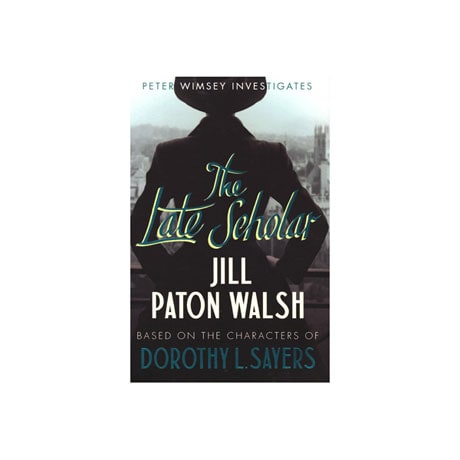 It is the early 1950s, and a dispute among the Fellows of St. Severin's College, Oxford University, over the sale of a rare historical manuscript, has reached a stalemate. Lord Peter Wimsey discovers that, as the Duke of Denver, he is "the Visitor," charged with the task of resolving the issue. Some of St. Severin's Fellows regard the manuscript as nothing more than an insurance liability, best sold off to purchase land; others disagree. But when the Warden disappears, and other Fellows begin unexpectedly dying, Lord Peter and his wife Harriet set out to uncover what is really going on at Oxford. Ever since taking over the mantle of Dorothy L. Sayers's series starring Lord Peter Wimsey and his detective-novelist wife Harriet Vane in 1998, at the request of the trustees of the Sayers estate, Whitbread Award winner Jill Patton Walsh has been crafting outstanding supplements to the beloved Golden Age series. This is her fourth, following The Attenbury Emeralds.

"If you love the books of Dorothy L. Sayers as I do, you will be elated to learn that Peter Wimsey and Harriet Vane are at their scholarly and detective best.... Somewhere Sayers is applauding."—Mystery Scene

"Cleverly plotted.... Walsh's pitch-perfect re-creation of the charismatic leads is a delight. Sayers fans can only hope for more."—Publishers Weekly (starred review)

"We know from internal evidence that it is 1952. The Duke of Denver, Peter Wimsey; his wife, the Duchess, who writes mysteries under her birth name, Harriet Vane; and the ever-present, ever-indispensable manservant, Bunter, are in receipt of a letter from St. Severin's, Oxford. It seems that Peter is the Visitor for the college, and a dispute has come up that he must adjudicate. Shall the college, in dire financial straits, sell a Boethius manuscript? This allows Walsh to write a love letter to Oxford, city and university; to illuminate the large and petty disagreements, both scholarly and personal, that then as now drive academe; to provide a rather alarming number of corpses; and to allow Peter, Harriet, and Bunter to do what they do best.... There are glimpses, too, of Peter's mother, elderly and frail but adorable as ever; of their oldest son, Bredon, who struggles with a future that does not include Balliol; and of Peter Bunter, who has set his sights on the London School of Economics."—Booklist (starred review)